Ever vigilant on behalf of the forces of political correctness, ConWebWatch is keeping a close eye on my WorldNetDaily column:

See if you can catch all the Nazi references Vox Day has dumped into his Jan. 29 WorldNetDaily column…. Day also describes German chancellor Angela Merkel as “Bundeskanzlerin,” which, it turns out, is not a Nazi reference; it just sounds like one.

No, it’s her actual title, as it happens. And I’m hardly the only one to notice the similarities between the German-dominated EU and their historical counterparts. In any event, I wrote Terry to request a correction.

I am writing to correct your January 31st blog post. This is not, by any standard, a Nazi reference: “In Europe and in the United States alike, the heyday of the banks is rapidly coming to a close. The looming revolution is not a battle between capitalism and socialism, or a class war between the bourgeoisie and the proletariat, but between the corrupt bank-government axis and the alliance of pretty much everyone else. “

It is, rather, a Marxist reference.

However, I must congratulate you, as you were absolutely correct to not include the reference to “Das Lied der Deutschen” in the title as a Nazi reference; although it is often considered to be one by the insufficiently historically informed, it is actually connected to the Weimar Republic that preceded National Socialist rule. 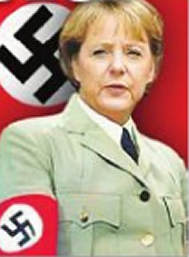