A tale of two historical vandalisms:

The United Nations Security Council on Friday condemned what it described as the latest “barbaric terrorist acts” in Iraq by Islamic State militants, including the destruction of priceless religious and cultural artifacts.

A video published by the ultra-radical Islamist militant group Islamic State on Thursday showed men attacking ancient Assyrian statues and sculptures, some of them identified as antiquities from the 7th century BC, with sledgehammers and drills, saying they were symbols of idolatry.

“The members of the Security Council strongly condemned the ongoing barbaric terrorist acts in Iraq by ISIL (Islamic State)” the council said in a statement. It also reiterated that the group “must be defeated and that the intolerance, violence, and hatred it espouses must be stamped out.”

“Today we continue the mission,” Landrieu said in a statement on the Davis statue. “These monuments have stood not as historical or educational markers of our legacy and segregation, but in celebration of it.”

Landrieu, the first white mayor of mostly black New Orleans since his father Moon held the job in the 1970s, called for removal of the monuments amid the lingering emotional aftermath of the 2015 massacre of nine black parishioners at a South Carolina church. The killer, Dylann Roof, was an avowed racist who brandished Confederate battle flags in photos. The slayings re-charged the debate over whether Confederate emblems represent racism or an honorable heritage.

Davis’ statue was the second of four monuments to the Confederate era that the City Council, at Landrieu’s behest, voted 6-1 to take down. After legal battles delayed the work, the first – a granite obelisk honoring whites who rebelled against a biracial Reconstruction government – came down late last month.

What, precisely, is the difference? There is no difference. It’s just vandalizing history of which one does not approve. 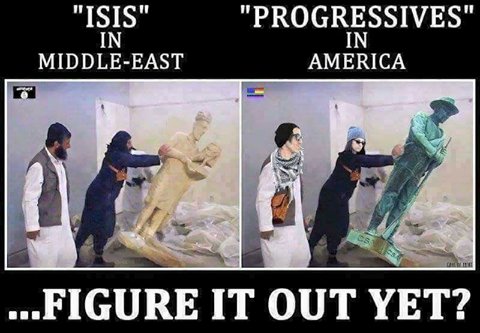