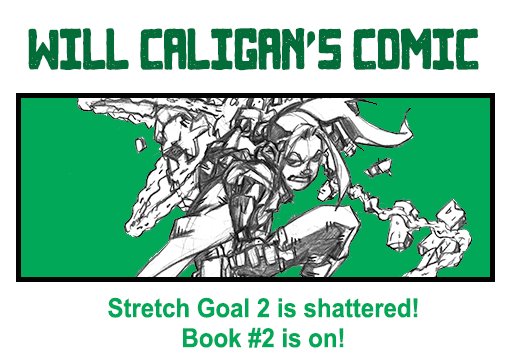 We’ve added three new rewards and one new stretch goal at the Will Caligan campaign. If you’ve already backed, you can now add on an additional paperback, hardcover, or the works for Book #2.

UPDATE: Megan Fox has posted a story about the campaign at PJ Media. Apparently the SJWs have launched a counter-campaign of sorts.

And the following exchange should suffice to demonstrate why the campaign really matters. Ethan van Sciver interviews Marvel artist Jon Malin about increased convergence in the comics industry:

JM: I’ve got editors going behind my back and changing stuff because they’re bowing down to other freaking ideologues that are out there. And then my books are coming out changed? This is not good. This is not cool. We’re castrating a book like Cable because some social justice warrior can’t handle a boob on a cover? Is that person the audience for Cable? Are they the one whose going to be going out there and grabbing the muscle-bound white male patriarchy? No! But we’re bowing down to them, we’re letting them affect our sales, we’re letting everything tumble away and nobody wants to say anything anymore. Everyone is afraid because people on the far left, they’re lying silent, they’re vipers in the grass. They don’t have to fire me, they just don’t have to hire me back again.

I’m glad you’re in. I’m glad that you got in at a time when you were able to build that career. But the next guy like me, it’s just going to be even harder. Because these people are getting further and further into control of these companies.

When they find out you’re a Trump supporter, you’re gone. Because they said it. They said they’re going to do it. If you vote for Trump, whether he wins or loses, we will remember who you are. This is straight from an editor at one of the Big Two.

How do we fight against that?

EVS: Well, look, this is your fight, Jon.

I don’t want it to be my fight. I want it to be the comics journalists fight. Where are these assholes at? It’s so disgusting that this industry has gotten so low in sales. Everyone is ignoring it. And fans are being ignored, they’re being told off, not only by editorial but by creators.

This isn’t Jon’s fight. It certainly isn’t the comics journalists’ fight; they are on the other side. This is a fight for everyone, of the Left and of the Right, who doesn’t want to be totally controlled by the social justice warriors. This is for everyone who wants to be able to write what he wants to write, to draw what he wants to draw, and to tell the stories that he wants to tell without facing immediate disemployment and permanent blackballing from the industry.

This is the GamerGate situation on steroids. It is as if all the game developers teamed up with the game journos against the gamers rather than quietly siding with the gamers.

Everyone to the left of me desperately wants to believe that a line will somehow be drawn between them and the evil crimethinkers of the extreme right. But Chuck Dixon, Will Caligan, and Jon Malin all demonstrate that the line will always and continuously move leftward until every individual and organization in the comics industry are forced to converge to the highest abstract standard of social and distributive justice in the utmost degree.

That is the goal. Since 1861, that has always been the goal.