Wired discovers that no one is buying Senior Technology Writer Nitasha Tiku’s lame attempt to launch a point-and-shriek swarm at the behest of those 15 poor, besieged Googlers who can’t harass and physically threaten their colleagues with violence and disemployment without their behavior being exposed to the public. Not even the sane non-SJW Left, who are beginning to understand that they are every bit as liable to be targeted by SJWs as the Right, and they are even more vulnerable to their swarmings.

As it happens, these were the highest-rated comments among Wired‘s own readers:

ThanksfortheFishes
“goading them into inflammatory statements”

How do you force anyone into writing a statement or saying something inflammatory if they don’t already want to say it? Personal responsibility is outdated I guess. Or maybe it’s just for white males.

RightishLeft
Only insecure idiots would want diversity to be forced from above by holding back some racial / gender groups and promoting others. It implies that the very people promoting diversity secretly believe that some groups are less able to win on merit alone than others. The only way to promote true diversity is via fair hiring and job promotion policies that emphasize individual merit, and merit alone.

John Reece
DIversity is swell, turning it into an obsessive-compulsive fetish thing is something else. ‘Diversity’ has also become leftist code for “don’t like white males”, when after all, it was mostly white males who invented Silicon Valley and most of modern science and technology.

NotSure2006
So…you are saying it would be wrong to leak the internal conversations on controversial subjects like diversity in the workplace if the person could experience backlash or doxxing. I wasn’t there but I can only assume the keyboard burst into flames from the irony.

indio777
Well, to quote ‘liz fong’ ” claiming she “could care less about being ‘unfair’ to” them, ‘them’ being white males…just because they’re white and male. That is most repugnant, unfair attitude ever. Perhaps that is why people hit back at this nitwit because now they’re saying ‘I could care less about being unfair to liz fong and her band of diversity pushers’. If you can’t take it, don’t dish it fool…. DISGUSTING! Wired, why didn’t you print WHAT these ‘minority group’ neanderthals actually wrote openly and were cheered on by other bigots within Google? Read the damn lawsuit. These people were mean, vicious, ignorant. There is NOTHING ‘diverse’ about picking on another group. EVER.

Mayrode Parashkov
It’s reminds me of Jordan Peterson interview and how Cathy Newman and Channel 4 played the victim card after losing the debate and the intellectual battle. Google, YouTube and Twitter and the leftist employees are not the victims here. You fire and harass people and now people are fighting back.

Of course, the article never mentions what those poor besieged Googlers actually did and said about their colleagues. Allow me to correct that sad journalistic deficiency.

You can believe that women or minorities are unqualified all you like – I can’t stop you – but if you say it out loud, then you deserve what’s coming to you. Yes, this is “silencing”. I intend to silence these views; they are violently offensive.
– Colm Buckley, Google

I’m not going to delude myself into thinking that nobody holds these opinions and feels marginalised in a genuine way. To those folks I would say “Doesn’t feel nice, does it?”. Leave it at home. If you’re not prepared to leave it at home, then leave yourself there.
– Dave O’Conner, Google

I will absolutely go out of my way to make sure that I never work anyone involved with or who endorsed that garbage. Because Nazis. And you should absolutely punch Nazis.
– Anthony Baxter, Google

I’m going to devote at least the first third of my 45 minute interview time to a discussion of experience with diversity. If the first fifteen minutes doesn’t satisfy me, I’ll continue the discussion. If need be, it will take forty-five minutes. I would encourage others to do the same. Judging “googliness” by a vague gestalt with no deliberate attention to such things is inadequate.
– Thomas Bushnell, Google

Fun fact! Keeping a list can get you called out on a certain reprehensible internal mailing list, and have threats of being reported to HR. Threats I ignored, naturally, and which ironically grew the list substantially.
– Paul Cowan, Google

I keep a written blacklist of people whom I will never allow on or near my team based on how they vew and treat their coworkers. That blacklist got a little longer today.
– Collin Winter, Google

The only way to deal with all the heads of the medusa is to no-platform all of them.
– Liz Fong-Jones, Google

It wasn’t just the highest-rated comments that opposed Tiku’s SJW spin either. Some comments were considerably more biting.

Something I Said?
AS A contributor to Wired #1 I have to say that the authoress of this solid slab of slop has flatulated the most unbalanced article in memory. And, as for the cited Vox Day, he has this authoress’ number when he notes: ” This is particularly effective if the SJW and his allies have connections in various media organizations, which allows them to rapidly transform a minor event into something that is perceived by the public as a major one. The purpose of the media campaign is two-fold: to stamp the Narrative with an “objective” perspective that echoes the SJW’s accusations and to let other potential allies know about the hate campaign in the hopes that they will add their weight to the hogpile.”

Here’s Your Sign
So…. Wired interviewed 15 people from one side of the debate and only threw in a few inflammatory comments from the other side? Modern journalism…

So much for the idea that Googlers are inclusive. Or intelligent and well-educated, for that matter. Let’s face it, that’s the real reason the SJWs at Google are so furious. They have been publicly exposed as highly politicized, intellectually fraudulent do-nothings instead of the smart, productive, 21st-century rocket scientists they consider themselves to be. 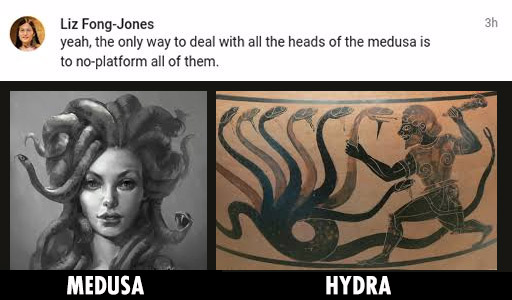