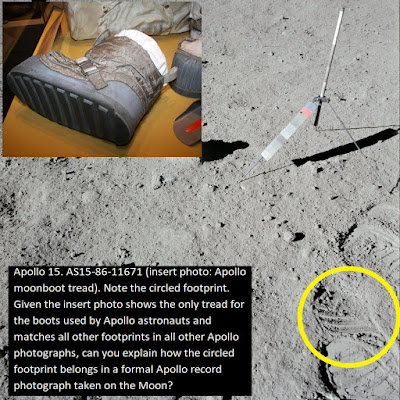 It was interesting to observe the reactions by many commenters yesterday to information that happened to challeng some of their assumptions about the world. Now, rather than resorting to simple Boomer “how dare you” rhetoric, let’s simply look at this pair of photographs logically. I don’t know about you, but I can think of at least seven obvious possible explanations for this apparent anomaly:

Now, how do you rank the probabilities of these seven alternative scenarios? And what do you think this pair of photos proves?

UPDATE: I think it looks a bit like someone with a moon boot stepped on top of a track left by the herringbone-tread wheel of the lunar rover, except the track ends and, at least in this photo, only half of the track appears to be present.