A former Obama official bails out a criminal rioter:

The Washington Free Beacon first reported that Salmah Rizvi, who served in the Defense Department and State Department during the Obama administration, went to bat for Urooj Rahman, who was arrested this weekend alongside Pryor Cashman associate Colinford Mattis.

It’s all a movie and we’re beginning to see exactly who the various actors are.

I received word from sources in law enforcement today that the FBI has identified the leader of the Boogaloo Movement, known as the Grand Boogaloo, as one Samuel L. Hyde of Minnetonka, Minnesota. 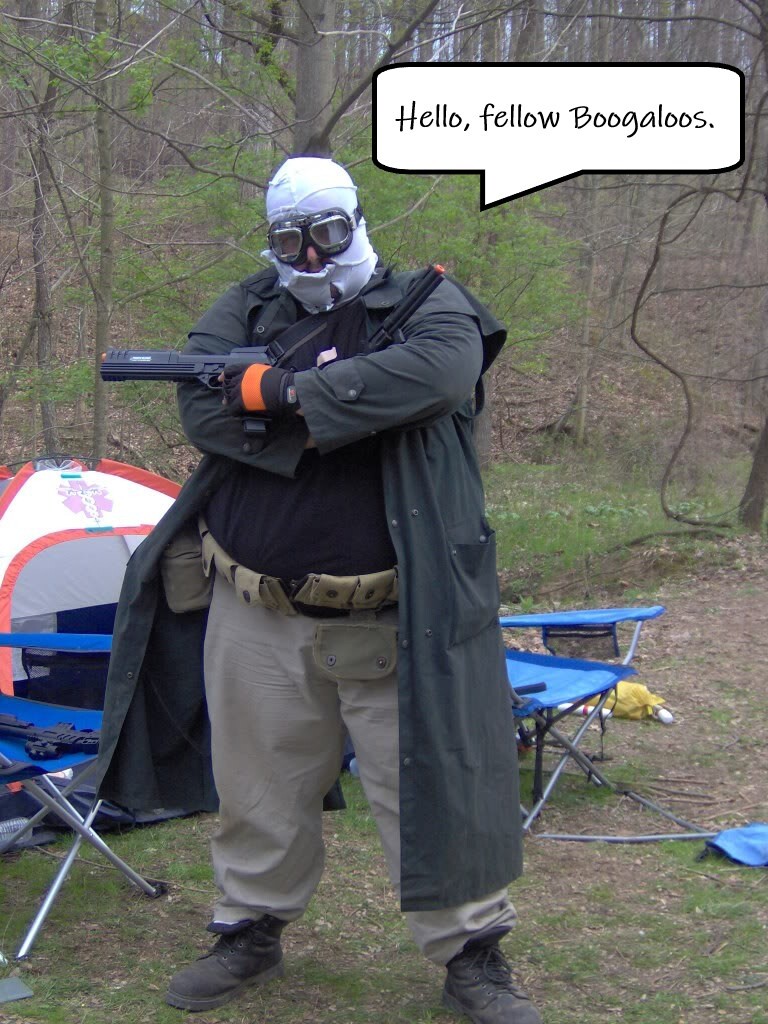 Antifa is stalking police and their families at home:

In a number of different communities in states ranging from California and Texas to Florida – reports have come in that small groups of individuals appear to be canvassing neighborhoods and taking pictures of homes that have police cruisers in the driveways.

“I can absolutely confirm this,” told us one police spokesman, who asked that his department be kept anonymous because of the threats.  “We’ve received multiple reports throughout the weekend both in terms of phone calls and alerts that neighborhood residents are putting out on community watch apps.”

It comes as police are receiving direct, personal threats through social media, calls and emails.

“We and our children are receiving threats,” one police lieutenant told Law Enforcement Today.

The departments we spoke with said that they’re currently making policy changes so that take-home police cruisers are either garaged or – for now – left at the police departments.

“We expect danger when on the job,” said one sergeant.  “But this is different.  They are threatening to burn down our homes and kill our families.”

This is why handling the “protestors” with kid gloves is a tremendous mistake.

Anonymous Conservative’s predictions about the coming revelation of a massive surveillance state that has been spying on everyone appear to be rapidly coming to pass:

Flynn lawyer Sydney Powell just revealed on Fox Business that Obama had a massive and widespread secret surveillance system called the Hammer. I’ve always said, surveillance rolls out as a package. If you get database pulls, you get tech deployment and monitoring. If you get tech deployment and monitoring, you get observation posts. If you get observation posts, you get physical coverage. If you get physical coverage, you get infiltration into your social circle. If she is right and the Hammer is getting revealed, it will be more than just a boring computer screen with meaningless databases amassed in one place. It will basically be a domestic CIA with operations divisions, tech divisions, logistics, direct action, data centers, slush funds, and all the parts of an intelligence outfit, times one hundred –  and ultimately run by a foreign power, and present in almost every nation, cataloging everyone.

What Q calls The Awakening might be better described as The Revelation, although perhaps that is a term too imbued with apocalyptic significance to be anticipated.

We’re still just seeing bits and pieces of the system, but everything from the Obama domestic spying program to the Epstein blackmail machine to the corruption of the FBI, the neocon wars, and the various conspiracy theories are almost certainly connected through it.

Flynn was going to audit the Intel agencies as he came into the White House and that was one of the
things they were terrified of. Plus they knew at NSA he would immediately discover their FISA abuses and the incredible widespread general surveillance abuses of the administration. I don’t know whether it’s from Mr. Brennan’s fusion center that he set up to focus on whoever he wanted to focus on, or whether it’s something called The Hammer, what it is there was a massive surveillance operation, very widespread, by the Obama administration to surveil all political opponents and anybody else they wanted to collect information on using the NSA databases, their own little research operation.

This is what Qanon is all about. This is almost certainly what they have been preparing everyone for. And it is not only real, it is going to shock tens of millions of people around the world to learn the extent to which they have been spied on and betrayed, and by whom. That’s what AC means when he talks about “infiltration into your social circle”.

Maxine Waters knew about it back in 2013:

“The President has put in place an organization with the kind of database that no one has ever seen before in life,” said Representative Waters. “That’s going to be very, very powerful,” Waters said. “That database will have information about everything on every individual on ways that it’s never been done before and whoever runs for President on the Democratic ticket has to deal with that. They’re going to go down with that database and the concerns of those people because they can’t get around it. And he’s been very smart. It’s very powerful what he’s leaving in place.”

I’m sure the conspiracy mirrorists will explain this away as a repurposed bill, but the facts certainly appears to be damning on their face. From Wikipedia:

The Coronavirus Aid, Relief, and Economic Security Act, also known as the CARES Act, is a law meant to address the economic fallout of the COVID-19 pandemic in the United States. In its original form, it was introduced in the United States Congress as H.R. 748 by Joe Courtney (D-CT) on January 24, 2019 although the bill was amended before it was passed.

It can’t be denied that an awful lot of people in the US government, which is to say the US Deep State, appeared to know about the pandemic before it officially started.

My operating theory is that the Deep State launched the virus as an attack on China and Iran, and China used its influence with the WHO as well as the globalist enthusiasm for immigration and international engagement to ensure that the attack blew back on the USA.

Which, of course, was probably just fine with the Deep State, as they thought they’d be able to blame the negative consequences on President Trump. But, as is his usual wont, he ju-jitsued them with his immediate travel ban.

And why the Prometheans are fighting so hard in a last ditch, ex post facto attempt to prevent the DOJ from dropping the charges against him:

In early April, Powell told the Vicki McKenna Show that the disgraced intel leader and others in the intelligence community were targeting Flynn over billions of taxpayer dollars that he knew were not being properly accounted for.

“Powell, who took over Flynn’s defense last summer, told the Vicki McKenna Show on 1310 WIBA Madison on Tuesday that her client was ‘totally set up’ because he threatened to expose wrongdoing by top intelligence officials in the Obama administration,” the Washington Examiner reported Wednesday.

“He was going to audit the intel agencies because he knew about the billions [former Obama era CIA Director John] Brennan and company were running off books,” she said.

It’s happening. It’s all going to come out, and probably before the end of the year. And Americans are not going to be happy to discover that the Obama administration was complicit in the Stasi-like surveillance of every US citizen in and out of the country.

At this point, the Democrats might as well just call themselves the Pedocratic Party.

Fmr head of John Kerry’s State Department security detail arrested for child molestation… J. Scott Moretti, a former deputy assistant secretary of the State Department who oversaw diplomatic security training, is accused of assaulting a girl beginning in 2011, between November 2011 & November 2013 … the female victim, who was between 10-11 years of age at the time of the offenses, was sexually assaulted by an acquaintance, identified as the accused, on more than one occasion during the above time frame.

They make it sound as if he was a bodyguard or something. But Deputy Assistant Secretary of the State Department isn’t exactly an outsider. He’s actually the bureaucrat who informed the Benghazi troops they were being left to fend for themselves.

Q was right. The DOJ has dropped all the charges against General Flynn:

The Justice Department on Thursday said it is dropping the criminal case against President Donald Trump’s first national security adviser, Michael Flynn, abandoning a prosecution that became a rallying cry for the president and his supporters in attacking the FBI’s Trump-Russia investigation.

The action was a stunning reversal for one of the signature cases brought by special counsel Robert Mueller. It comes even though prosecutors for the past three years have maintained that Flynn lied to the FBI in a January 2017 interview about his conversations with the Russian ambassador…. In court documents filed Thursday, the Justice Department said it is dropping the case “after a considered review of all the facts and circumstances of this case, including newly discovered and disclosed information.” The documents were obtained by The Associated Press.

The department said it had concluded that Flynn’s interview by the FBI was “untethered to, and unjustified by, the FBI’s counterintelligence investigation into Mr. Flynn” and that the interview was “conducted without any legitimate investigative basis.”

The God-Emperor’s Silent War continues. As Q has repeatedly reminded us, the enemy is absolutely sick.

Four children, one as young as two-months-old old, have been filmed being raped before the videos were distributed to sick paedophiles all over the world. Sixteen people were charged with 728 sexual abuse and child exploitation offences after a two-year investigation by the Australian Federal Police in conjunction with the US Department of Homeland Security.

The children were reportedly related to their abusers, who used the dark web and encryption technologies to send explicit images and videos around the world before they were finally rescued.

AFP Commissioner Reece Kershaw said the coronavirus lockdown had created a surge in activity on the dark web, including grooming and live-streaming, and warned parents to be hyper aware of what their children are doing online at all times. ‘It is very hard to explain to a society, to people who don’t see the images,’ he told The Australian. ‘These involve images like you’ve never seen before.’

Three of the rescued children were from New South Wales and one from Victoria, while the offenders include five people from Queensland, four from Western Australia, three from Victoria and NSW and one in South Australia.

There were 632 charges related to those from Victoria and 70 to those in NSW, with all 16 charged with contact offending and producing and exchanging child sex material through the internet.

Evidence from the arrests led detectives to believe child pornography was being produced in Australia for distribution around the world.

Notice the involvement of Homeland Security. One sincerely hopes they are actively hunting down the customers.

Ellen Degeneres “jokes” about being in jail at home:

Ellen has been slammed for being tone deaf after cracking a joke that being home all the time during the coronavirus pandemic was akin to being behind bars.

‘This is like being in jail,’ Ellen told her fans during Monday’s show as she sat in a spacious living room with windows opening onto a large plant-filled yard. ‘Mostly because I’ve been wearing the same clothes for 10 days and everyone in here is gay,’ she quipped.

An interesting little quip given the rumors about The Storm. And for those who don’t understand why the confirmed guilty aren’t simply being rounded up and charged, read The Trial of Roger Stone. There is no point in arresting those who will never be charged by corrupt prosecutors, and if charged, will be released by corrupt judges.

We can’t possibly know what’s actually happening now, but we can observe that at least some potentially related arrests are continuing to take place despite the lockdowns.

An Urbana teacher and cross country coach is now facing child pornography charges. Douglas O. Mynatt, 56 of Savoy, was arrested Friday, April 3. Mynatt is employed as a physical education teacher at Urbana’s University High School and is the coach of the girls’ cross country program.