I wouldn’t have even thought it was possible to SKI down K-freaking-2!

A super-athlete’s mission become the only person to ever descend the world’s most dangerous mountain on skis has been turned into a feature length documentary.

In 2018, Andrzej Bargiel made history when he clicked into his bindings 28,000 feet up the side of K2 in Pakistan and didn’t once take them off until he was safely off the mountain. Following a treacherous 60-hour ascent without supplemental oxygen, the Polish mountaineer had to make his way back down ‘as quickly as possible’ to escape the notorious ‘death zone’ above 8000m (26,200ft).

He then dodged ice falling ‘at the speed of bullets’ to reach the Messner Traverse, a barely-climbed narrow route with deep caverns on either side, and on to the crevasse-filled Kukuczka-Piotrowski route back to base camp.

I’m “deeply troubled” that a State Department official was “stunned” by Johnson’s comment on the importance of black fathers. I don’t know a single black person unconcerned with the general state of the black family. Seventy-five percent of black children are born to unwed mothers and raised in homes with an absent father.

Johnson’s “real challenge” statement is as controversial and insensitive as observing water’s ability to produce wetness.

But somehow Johnson is being analogized to disgraced and bigoted former Los Angeles Clippers owner Donald Sterling. ProFootballTalk founder and NBC Sunday Night Football contributor Mike Florio, who has never hired a black contributor to his website, raised the possibility of Johnson being forced out of the NFL….

Black people, we’re being set up and used. We’re pawns in a global political game. The attack on Woody Johnson is really an attack on Donald Trump. Johnson’s real crime was allegedly asking a British official about the possibility of The British Open Golf Championship being played at Trump’s Turnberry golf resort in Scotland.

Trust me, the purple-haired white liberals holding up Black Lives Matter signs and rioting in Portland and Seattle don’t give a f–k about black people. Those aren’t George Floyd’s friends or family members. Those are people chasing power they were denied in junior high and high school. Only a fool would think they’re going to share their new-won power.

Let’s face it, Woody Johnson has hired hundreds, if not thousands, of black employees. Mike Florio has never hired one. Who, then, is the racist?

EA leaps to distance Maddens from the Redskins:

We don’t know what the Washington NFL team’s name and logo will be this season, but in Madden 21, the team will have no name or logo.

EA Sports says that Madden 21 will have a generic Washington team, until updates are available when the team has chosen its new name and uniform designs.

“We are pleased to see Washington’s decision to change their team name and visual identity,” EA said in a statement. “We are quickly working to update Madden NFL 21 to feature a generic Washington team, while we await final word on the updated team name and logo design.”

It appears there may be a good reason Dan Snyder suddenly reversed course on changing the name of the Washington Redskins:

Not long after the Washington owner announced that his team would no longer be known as the Redskins, a series of cryptic tweets from local reporters emerged, warning of an imminent bombshell set to shake the franchise to its core.

“The warped and toxic culture of the Washington Football Team is about to be exposed in a sickening fashion . . . Again,” wrote CBS’ Jason La Canfora, a former team beat reporter.

Though it remains unclear what will surface, several other reporters have also been tipped off to news that could be devastating to the team.

It is becoming ever more apparent that blackmail, rather than corporate profits, that is the engine of the US economy.

The Washington NFL franchise, 10 days after announcing that a “thorough review” of its name will be conducted, has made a preliminary decision.

At the end of the current review, the old name will be retired.

“On July 3rd, we announced the commencement of a thorough review of the team’s name,” the franchise announced in a statement. “That review has begun in earnest. As part of this process, we want to keep our sponsors, fans and community apprised of our thinking as we go forward.

“Today, we are announcing we will be retiring the [current] name and logo upon completion of this review.”

It’s going to be amusing to see all the journalists trying to thread the needle explaining why the Redskins had to go, but the Chiefs don’t, right up until the narrative shifts again and the Chiefs become the target du jour.

If Snyder and the NFL are foolish enough to cave on this, it’s only a matter of time before the New England PATRIOTS and the Kansas City CHIEFS are targeted. And no amount of exegesis concerning what is and what is not a racial slur is going to prevent it.

At some point in time, people are going to grasp that giving any ground at all to these demoniacs is simply an invitation to subsequent attacks. There is always one, and only one, answer to give to corporate threats to pull support in order to force your compliance in anything: “fine, go away now.”

The NBA dives deeper into the sea of convergence:

One of the central arguments against restarting the NBA season was the momentum social justice reform had gained in the United States. Playing basketball would theoretically provide a distraction for a nation whose focus should be on combatting both systemic racism and the ongoing coronavirus pandemic, and a number of players were reportedly uneasy about being part of such a distraction. Were the NBA to resume play under the circumstances, it would have to use its platform in the name of social change in order to satisfy those players. Fortunately, the NBA has taken significant steps in that arena.

On Saturday, it was reported that players will be able to include social justice messages on the backs of their jerseys at Disney. That decision, while powerful, puts the onus on players. The league itself needed to send a message of solidarity, and is doing so with its latest decision. According to ESPN’s Adrian Wojnarowski, Zach Lowe and Ramona Shelburne, the league plans to paint “Black Lives Matter” on both sidelines on all three of the courts they will be using at Disney’s Wide World of Sports Complex.

Brave. And stunning. Thank you for this.

And when attendance and television viewership plunge off a cliff, the coronavirus, not the obvious corporate cancer, will be blamed. I’d like to say that I will henceforth be ignoring the National BLM Association, but I haven’t paid any attention to the NBA since Michael Jordan retired the second time. 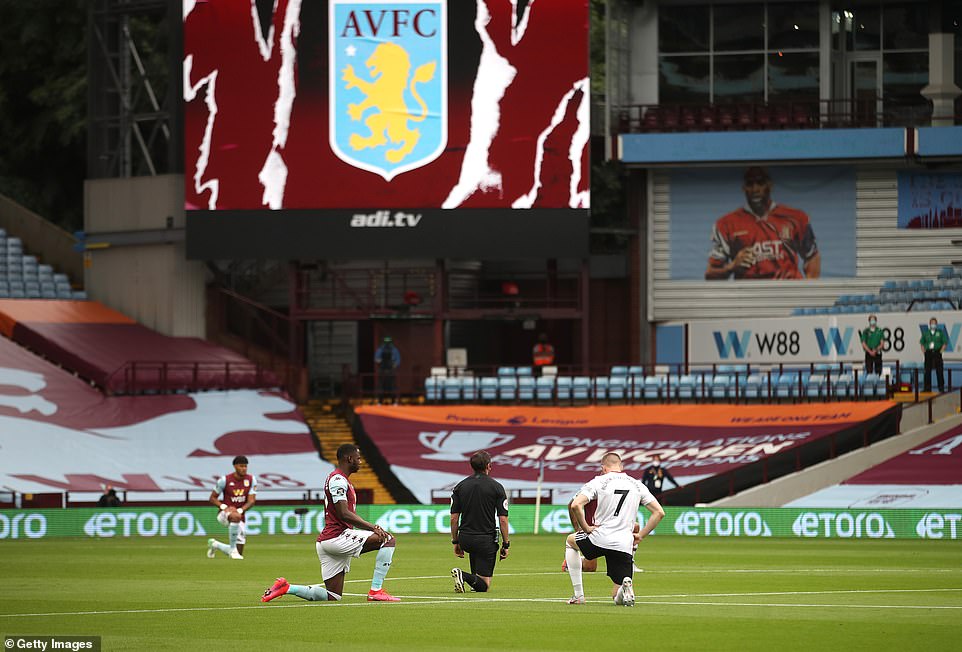 The Premier League submits to Black Lives Matter in front of empty stadiums. This sort of political propaganda should help ensure that stadiums across the UK and USA will remain empty, even when fans are permitted to attend games.

Between the banning of the Confederate flag and the announcement of a Black Lives Matter car, NASCAR should be all but out of business after another decade of decline:

NASCAR has officially banned the Confederate flag from its races and properties just a day after its only black driver, Bubba Wallace, demanded it be removed.

On Wednesday, NASCAR officials said in a statement that the Confederate flag ‘runs contrary to our commitment to providing a welcoming and inclusive environment for all fans, our competitors and our industry’.

‘Bringing people together around a love for racing and the community that it creates is what makes our fans and sport special. The display of the confederate flag will be prohibited from all NASCAR events and properties.’

Once you permit the SJW infestation, it’s only a matter of time before they converge the institution. And once they metastasize, there is no coming back from it. The only thing left to do is build something new and do a better job of keeping them out next time.

You can almost hear the NFL media’s collective voice shaking even as the sportswriters continue to cuck for Black Players Matter:

President Trump will again make NFL players kneeling during the national anthem an issue this year.

Responding to NFL Commissioner Roger Goodell’s statement that the league was wrong not to be more supportive of players’ protests, Trump tweeted late on Sunday night that he still considers kneeling during the anthem to be disrespectful.

“Could it be even remotely possible that in Roger Goodell’s rather interesting statement of peace and reconciliation, he was intimating that it would now be O.K. for the players to KNEEL, or not to stand, for the National Anthem, thereby disrespecting our Country & our Flag?” Trump wrote.

I think that can be not unreasonably described as a warning shot across the bow.