We are pleased to be officially releasing two new Castalia House books today. The first is the novel Victoria, which is, as the subtitle suggests, “A Novel of 4th Generation War”. It is very different than our other novels, in fact, its publication might even be considered a little ironic, in light of Scooter’s recent blog post on Pink SF Propaganda vs Blue SF Storytelling. This is because Victoria can quite reasonably be described as the very sort of propaganda we detest in modern SF/F, except it happens to be against politically correctness rather than supportive of it. As one proofreader rather amusingly commented, “That was certainly an interesting work.  On a superficial level, I’ll
say it’s the most politically incorrect thing I’ve ever read in my
life.  I thought of myself as politically incorrect, and even I blanched
at a lot of it.”

I have to admit, there were moments when I found myself thinking: “he can’t possibly be going… well, I guess he is.” The difference is that Victoria is an openly and avowedly political novel, unlike Pink SF, which is politically correct propaganda marketed deceptively as science fiction and fantasy. And the secondary difference is that Victoria is more than mere traditionalist propaganda. It is also, much like Atlas Shrugged and 1984, a didactic novel. It amounts to a dramatic instruction course on how the principles of 4GW are utilized, set in a near-future fictional version of America that is unfortunately not nearly as far away from reality as one might wish. If I were to describe Victoria in a single sentence, it is as the Christian lovechild of Ayn Rand and Tom Clancy.

The same proofreader later noted, “Less than 24 hours after finishing Victoria and thinking, “Man, this isn’t very realistic,” I woke up to see that an entity named The Islamic State is moving to establish a gold-backed currency. In the same week the West landed a spacecraft on a comet for the first time in human history, but the big story today is that one of the scientists wore a shirt with girls on it and was forced to make a tearful apology to the entire world. This latter event goes far beyond anything in the book.”

Perhaps we’re the ones living in someone else’s parody. Anyhow, those who have been reading Victoria in serial at Traditional Right should be informed that the published version includes the final one-third of the book that will not be posted online. Victoria is available for $9.99 in EPUB and Kindle format from the Castalia House store and in Kindle format from Amazon. 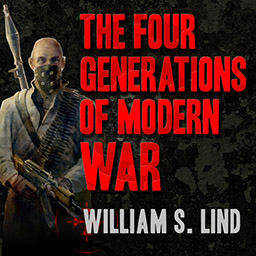 On a thematically related note, after receiving several requests we have made the transcription of the lecture at Quantico by William S. Lind that first introduced the concept of 4th Generation War to the U.S. military available as a separate ebook in addition to the previously announced bundle with the recording of the lecture itself. The ebook/audiobook combination is still available in both EPUB and Kindle formats for $3.99 from the Castalia House store, while the ebook alone is $2.99 in Kindle format from Amazon. The lecture is only 51 minutes, so the ebook is only 24 pages, but it packs a remarkable amount of information in it and will be of considerable information to anyone who wishes to better understand 4GW in either its military or strategic applications.

And thanks very much to all the New Release subscribers who have already purchased Victoria. We hope you will enjoy it, but more importantly, we hope you will learn something from it.