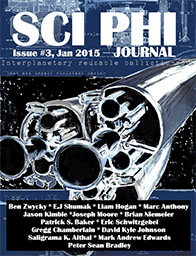 Jason Rennie has released the January 2015 issue of the Sci Phi Journal and it is now available at Castalia House in EPUB and Kindle formats. SCI PHI JOURNAL Issue #3 contains eight short stories and four non-fiction articles, including Issue number three contains eight short stories, including “Philosophical Reflections on The
Doctor Who 50th Anniversary Special” by David Kyle Johnson, “A Deeper
Rabbit Hole: Reconsidering the Philosophy of the Matrix Trilogy” by
Joseph Moore,  and “Khan as Nietzschean Übermensch and as Moral Actor” by
Patrick S. Baker. It also contains the next two chapters in the serial novel that began in the December issue.

The third issue is, like its two predecessors, only $3.99. The content of the previous issues has been pretty solid; I’m not at all interested in Star Trek and yet I found the comprehensive takedown of a critic concerning a particular Q episode to be as interesting as it was convincing. The stories have been good too. I don’t mind confessing that we’ve mined the journal for two authors, one of whom is currently writing what I expect will be a very intriguing futuristic detective novel; the other will be contributing to the second volume of Riding the Red Horse, which is already shaping up to be a serious murderer’s row.