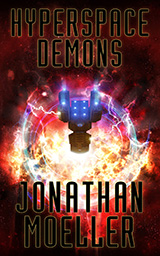 In space, the demons can hear you scream.

Space travel has always come with risks. But hyperspace travel comes with one particularly frightening hazard, namely, the non-corporeal dark energy-based macrobiotic entities that inhabit the void and are insensibly drawn to the presence of human minds. Once penetrated by a macrobe, the infected human mind rapidly devolves into raving insanity, which usually presents in a homicidal manner. Fortunately, hyperspace-capable ships are protected by a dark energy resonator that keeps the macrobes away and thereby permits safe interstellar travel.

But what happens when a ship’s resonator is sabotaged while it is traveling through hyperspace? And who would be so insane as to unleash a demonic infection of mutating madness on an entire ship’s crew?

Hyperspace Demons is a novella by Jonathan Moeller, one of the most prolific self-published authors of science fiction and fantasy today. Featuring a cover by JartStar, Hyperspace Demons is his first publication with Castalia House. And in respect of Anonymous Conservative’s newly announced free days (about which more after the jump), we’re extending the New Release newsletter offer for two more days, which means that if you buy Hyperspace Demons from Castalia House today or tomorrow, you will also receive a free copy of Jonathan’s Frostborn: The Gray Knight. If you would like to sign up for the New Release newsletter to take advantage of similar offers in the future, you can do so here.

I’m also looking for ten volunteers to review Hyperspace Demons. If you’re interested, please email me with HYPER in the subject and specify MOBI or EPUB.

For those interested, The Evolutionary Psychology Behind Politics,
How to Deal with Narcissists, and The Altar of Hate by Vox Day will all
be free in ebook form at Castalia House on Monday and Tuesday.  The Altar of Hate is a compilation of ten great stories ranging from fantasy to military fcience fiction. As one reviewer wrote, “Each
offering contained in The Altar of Hate tickles or provokes the mind
with salacious ‘what ifs’ and glances behind the veil of reality. The
stories move along, but one feels the uneasy eyes of the abyss staring
back as you progress, as it were, through a darkened ancient forest.
Only an author of the first rank could achieve this.


” While I don’t have that big of a readership compared to Vox, I’m
hoping those here who haven’t yet stopped by Castalia’s website and
partaken of their incredible titles will maybe find a great new source
for all their high quality
sci-fi/fantasy/military-theory/educational/non-fiction needs, and in so
doing help establish our foothold on this great new beachhead in the
publishing world. If we can get Castalia to the point it is the new
Simon and Schuster, we will have helped alter the very terrain on which
our future battles will be fought. It is an exciting time in Conservatism. The theories beneath
political science are shifting, the cultural tides in publishing are
changing, and maybe the very natures of our citizens are becoming more
K-selected. It feels like we are approaching a turning point rapidly,
and just at the right time. Until the turning point comes, take some free books, then tell your
friends about r/K, and rave to your friends about how awesome Castalia House is. We are making a difference with every person we tell.


In other words, if you buy Hyperspace Demons today, you can pick up as many as four free books for $2.99. Not a bad deal. And speaking of “how awesome Castalia House is”, if you have any interest in fantasy and science fiction and haven’t already bookmarked the Castalia House blog, you are really missing out on some excellent and intelligent content. One of our newest bloggers, Morgan, is rapidly demonstrating that he’s capable of hanging with Jeffro, Daniel, and Scooter with his detailed anthology reviews; you’ll want to read his post on The Sword & Sorcery Anthology, with an introduction by David Drake, complete with a comment by David Drake himself:

A couple of years back, if you searched for Tachyon Publications’ The Secret History of Fantasy on Google Books, this is what would come up:

“Tired of the same old fantasy? Here are nineteen much-needed antidotes to cliched tales of swords and sorcery. Fantasy is back, and it’s better than ever!”

The lure of filthy lucre must have proven to be too much as Tachyon published The Sword & Sorcery Anthology in 2012…. The 1970s entries are dependable. Karl Edward Wagner’s “Undertow” is
one of the most memorable Kane stories. The Ramsey Campbell story has
never been reprinted to my knowledge.

Some of the seven post 1980 stories get dodgy. There was sword and sorcery in the 1980s in Fantasy Book and Space & Time. The 1990s were lean and grim but still you had Shadow Sword and Adventures in Sword and Sorcery. The editors did no deep excavation.

I never thought of Jane Yolen as a sword and sorcery writer. I used to read her stories in The Magazine of Fantasy & Science Fiction
decades back and liked them. Her story is good if not a bit clichéd.
Does anyone find it disturbing there was an anthology entitled Warrior Princesses? That is where “Become a Warrior” originally appeared.