So, who is more reasonably deemed “racist as fuck”, a white man active in science fiction fandom who created one of the most racially iconic scenes of the last decade and is openly trying to exclude a Native American from the science fiction world, or a part-Mexican Native American who dares to respond to people attacking him? I remember seeing that scene myself and thinking: “seriously, the white girl Christ?”

Last summer, in the finale of Game of Thrones’ third season, mother of dragons Daenerys Targaryen stood outside the walls of Yunkai waiting for the slaves she just freed, hoping to convince them to join her army as free men. Daenerys, the white-blonde queen traded moons ago to the Dothraki by her brother, moves into the crowd of outstretched brown arms as they chant “mhysa”, which, we learn, means “mother” in their native tongue, and is carried into the crowd as the camera pulls back to show her floating in the middle of this sea of arms like the bright planet in a constellation of darkness.

I turned to my husband and said: “No one at HBO remembers the visual impact of slavery, I guess?” It was at that moment I decided to stop watching it. I’m aware that Game of Thrones is a TV show, a work of fiction, but having invested in it for three seasons, I no longer trusted the creators to bridge the gap of thoughtful conversation between action and intent. How much misogyny and racism are we expected to put up with in the name of entertainment? 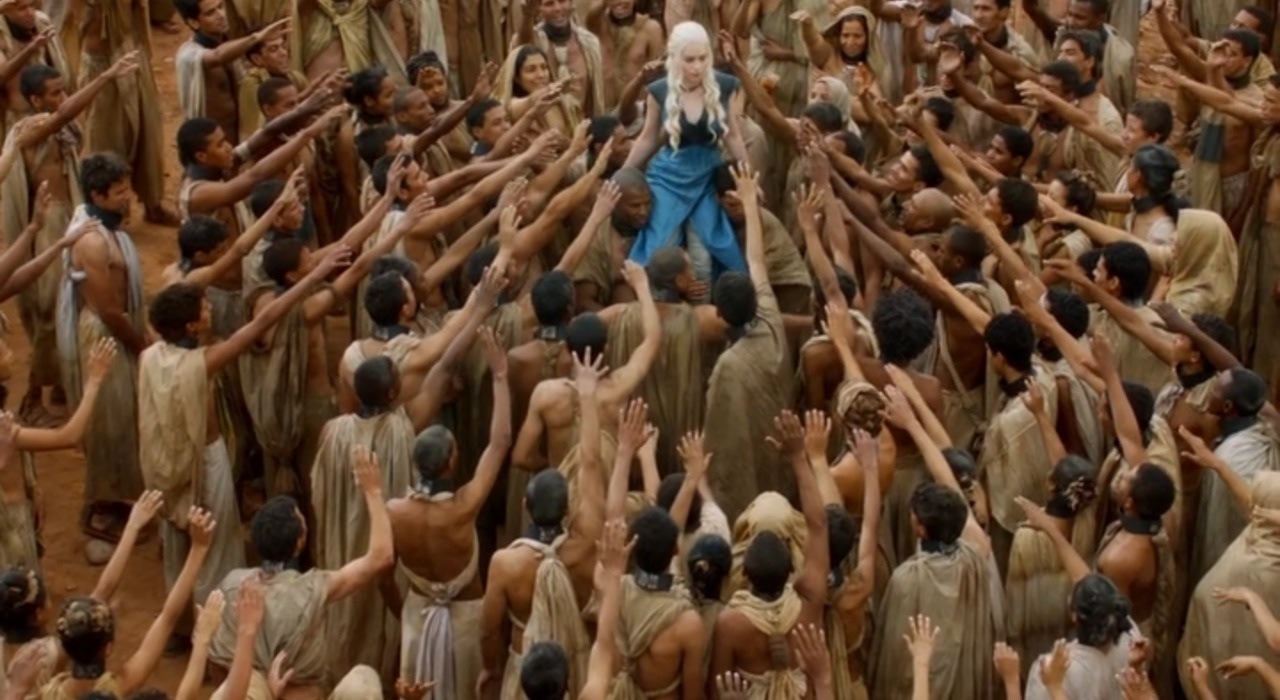 Save us, little white girl!

The man who came up with this imagery is calling me racist? And doing so because I generously described a deranged black woman as a “half-savage” after she described Robert Heinlein as “racist as fuck”, most of science fiction fandom as “racist as fuck” and me as “a self-described misogynist, racist, anti-Semite, and a few other flavors of asshole.” I tend to doubt Martin has any idea who and what he is defending when he attacks me.

I am not. And no doubt Dr. Martin van Creveld, the brilliant Israeli military historian I have the honor of editing and publishing, would be very surprised to learn about the anti-Semitism I supposedly proclaim so loudly. I know I was. Needless to say, I have never described myself as any of those things. Nor am I any of those things.

As it happens, my novelette that was nominated for the Hugo last year, “Opera Vita Aeterna” from The Last Witchking, is about a deep and abiding friendship between two individuals of different races, an elven sorcerer and a human monk. It is not a story of hate, but of three loves, the love of knowledge, the love of God, and the love of a friend. Another short story in that mini-collection, “The Hoblets of Wiccam Fensboro”, is a story about a reluctantly righteous goblin saving innocent hoblets from the hoblet-hating orcs who occupy his village.

I am absolutely nothing like Requires Hate. When Martin says “Make no mistake. Vox Day and Requires Hate are twins. Mirror images of one another.” he not only makes a mistake, he lies.

John O’Neill says I’m the most hated man in SF, but honestly, I don’t think we’ve even come close to maximizing the hate yet. All we need now is for George Martin to have a heart attack from the stress brought on by attacking #GamerGate, thereby enraging all the Westeros fans who haven’t given up hope that Martin has a Secret Master Plan to salvage the series and reverse the disaster of the last two books. Of course, the Torlings would inevitably put it all down to my cunning plan to market Castalia House in general and ARTS OF DARK AND LIGHT in particular.

“Vox Day is ruthless! George RR Martin’s untimely death just proves he will STOP AT NOTHING!”

Anyhow, this tweet amused me: Be especially nice to @GRRMspeaking at the moment. He’s getting much flack right now.

Do you think? Because I was deeply moved by his plight, I felt I would be remiss if I failed to respond:

@GRRMspeaking My response to you is here: http://voxday.blogspot.com/2015/04/who-is-racist-george.html … I think it is clear who is, and is not, “racist as fuck”. #SadPuppies

@GRRMspeaking Now those you called “toads” will respond. Only they’re not toads. They are the Dread Ilk and they are wolves.