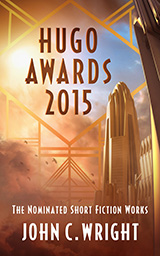 John C. Wright burst onto the science fiction scene in 2002 with his astonishing The Golden Age.
Published by Tor Books, Amazon.com declared it to be “the most
ambitious and impressive science fiction novel since China Miéville’s Perdido Street Station. Amazingly, it is John C. Wright’s debut novel.”

Publishers Weekly wrote: “It’s already clear, however, that Wright may be this fledgling century’s most important new SF talent.”
In 2014, Castalia House began publishing collections
of Mr. Wright’s short fiction, much of which was hitherto unpublished,
including Awake in the Night Land, City Beyond Time: Tales of the Fall of Metachronopolis, The Book of Feasts & Seasons, One Bright Star to Guide Them, and Transhuman and Subhuman: Essays on Science Fiction and Awful Truth.

A record-setting five of those works were nominated
for the 2015 Hugo Awards in three categories. A sixth work was also
nominated for Best Novelette, but was subsequently ruled ineligible by
Sasquan. All four of the Hugo-nominated short fiction works, as well
as an essay from Transhuman, are included in this special release, which is available for free from Castalia House in both Epub and Mobi (Kindle) formats and will also be available in the Hugo packet.