It’s time for the Men of the West to understand they do not live in democracies, or even democratic republics anymore. They live in oligarchies. The Ciceronian political cycle predicts aristocracy follows democracy, and that is precisely what we are seeing in the USA and in the UK. What Carroll Quigley described as the “Anglo-American Establishment” has turned its back on even the pretense of democracy known as “representative democracy”. 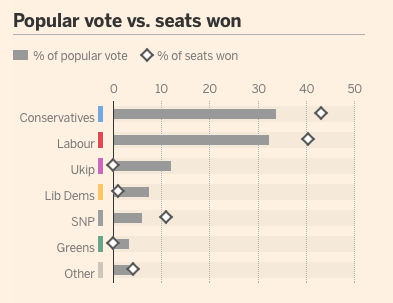 That’s not only not democracy, it’s not even representation. It’s not “one man, one vote” either. People still complain that a black individual was counted as three-fifths of a person in the southern States of America, but in the UK in 2015, a UKIP voter is counted as one-one hundredth of an SNP voter.

In the information age, there is no longer any reason not to adopt direct democracy. The technology already exists to utilize it. And all the existing evidence from various referenda around the world proves that direct democracy is more sober and sane than the misnamed “representative democracy” it would replace. All the worst features of “mob rule” are present, and then some, in the corrupt version of “representative democracy” that presently dominates; it is considerably easier to buy or corrupt a few hundred “representatives” than hoodwink 50 percent of the population.

In any event, in light of the Tory victory, it should be interesting to see how long it takes David Cameron to start weaseling out of his pledge to hold a referendum on Britain leaving the EU.