I’ll admit, I was concerned about taking part in the Color Run today. After all, not only was I going to have to run 5k, which is exactly 4.82 kilometers more than I am designed to run, but I was going to have to do so in a tutu, a concept which inspired no small amount of hilarity in the household this week.

To quote one member: “I think it’s a day I’ll always remember… and not in a good way.” So, you know, thanks for that, everyone who donated. It’s a pity we can’t set any of that aside for future psychotherapy.

Moreover, I received a warning that I was quite literally putting my life in danger by taking part in the run, which turned out to be true, although not in exactly the way that the messenger, who turned out to be a lifesaver, imagined. This Good Samaritan had been concerned that either George Soros or the Clintons might take advantage of my readily identifiable outfit and send a sniper; as it turned out, it wasn’t the American political elite that was targeting me today, but an even more remorselessly evil party. 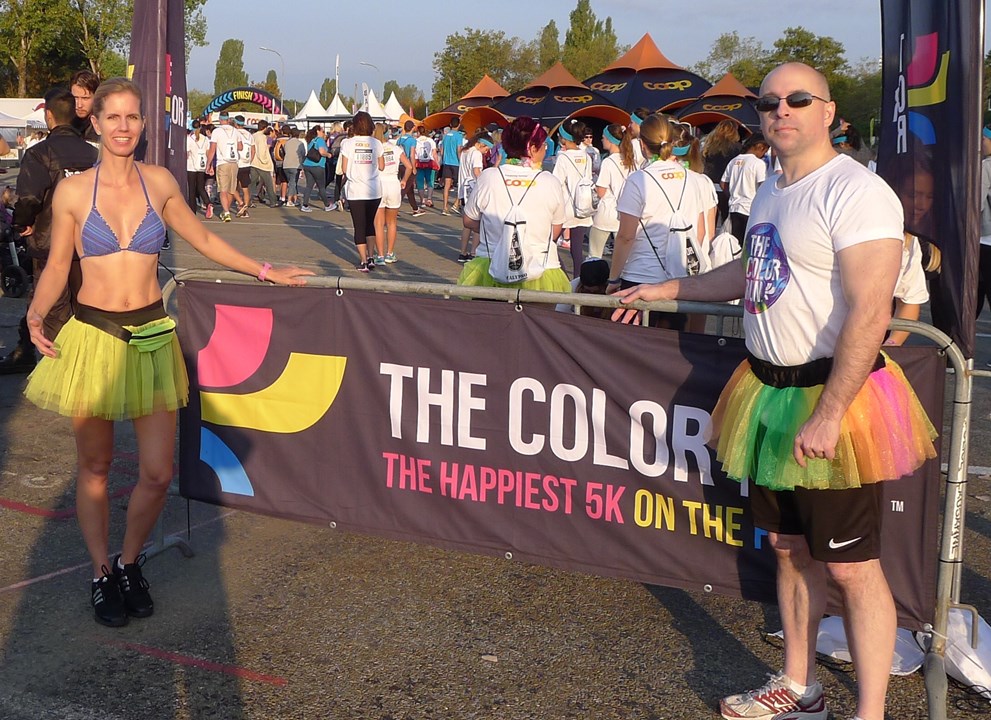 We got up very early, so early that it was pretty much a toss of the coin as to whether I’d just stay up all night or not, and made the drive to Lausanne, Switzerland, where we met our friends with whom we were doing the run. We changed in the parking lot, where it was much appreciated how my multicolored tutu nicely matched the colorful logo of the t-shirts we were provided. It was rather cold, which inspired Spacebunny to deliver an equally colorful soliloquy in appreciation for the generosity of the donors who were the reason she was wearing nothing but a bikini under her tutu.

Which, of course, was not as pretty as mine, as hers was only yellow. I pointed out that she would probably be glad to not be wearing very much in the way of clothing once we started running and the sun rose a bit higher in the sky, an intelligent observation that impressed her to such an extent that she expressed a keen wish to feel my teeth in her flesh, a sentiment that she managed to phrase in an admirably succinct manner. She was also delighted to discover that while there were people wearing everything from unicorn suits to dragon outfits, she was the only runner in a bikini.

As you can see from the picture on the right, I felt very confident in my tutu, and indeed, was inspired to dance. More than a few comments were made on how well it complimented my legs, and several cars even honked at us as we approached the venue.

I had taken the warning to heart, however, and I remained on alert. Moreover, I had prepared by coating four shurikens with Chilean Tree Frog venom and putting them in a concealed fanny pack along with a miniaturized kukri that is my favored weapon for close-in combat. I was glad I had, too, when just over one kilometer into the race, I spotted a shadowy figure moving amidst the trees on the interior of the course. It was pure chance that he caught my eye, because at the time, I was running hard and battling a severe side-cramp and possibly dehydration as well.

Fortunately, at just that moment, I was passed by a small six-year old girl wearing rainbow leggings and kitten ears, as well as an elderly woman who was moving surprisingly fast despite using a walker. Taking advantage of the two of them blocking me from the stalker’s sight, I threw myself to the ground, rolled behind a tree, then low-crawled behind the stalker, who, based on his apparel, was a garden variety corporate ninja. I heard him speaking Japanese on his phone, saying that he’d just lost contact with the target, which told me that he was merely the spotter. I waited to see if I could learn anything more from him, and it soon became apparent that the hit team for whom he was spotting were planning to make their move just after the yellow station at the midway point.

I hit him with a shuriken behind the ear before launching my attack, and although he evaded my Reverse Eagle Strike and came back at me using a modified Tibetan Drunken Monkey style with which I’ve always had trouble, I managed to block both a Spinning Roundhouse Spider-kick and a High-Low Butterfly Jab before the poison took effect. Unfortunately, the venom hit him harder than I’d expected and he collapsed unconscious before I could find out how many hitters there were, or who sent them, but based on the particular modification of his kung-fu, I was fairly certain that it would be a two-man team of hand-to-hand specialists from a Singapore-based “security” company that operates behind the false front of a wealth management division of Deutsche Bank.

So, I retrieved my shurikin from his neck, wiped my fingerprints off it and buried it, feeling a little more secure in the knowledge of where the attack would take place. I thought about taking his phone and using it to set a trap for the hit team, but I realized that my Sagamihara accent would only alert them to the fact that something wasn’t on the up and up. So, I returned to the course, and I have to admit, knowing that the hit team was waiting for me worried me considerably less than the fact that I had nearly four more kilometers to go.