A North Carolina man who sent customers and employees scrambling when he fired a gun inside a northwest Washington pizzeria  Sunday told police he went there to investigate a fictitious online conspiracy theory involving the restaurant and high-ranking Democrats.

Police received a report of a man armed with a rifle at Comet Ping Pong about 3 p.m. Sunday…. The gunman fired at least one shot from the rifle into the floor, but no one was hurt, police said.

The incident drew heavy police response. Dozens of officers with guns drawn were in the streets, and a helicopter circled above the scene. Police arrested 28-year-old Edgar Maddison Welch of Salisbury, North Carolina, and charged him with assault with a dangerous weapon. Police recovered two guns inside Comet and another inside the suspect’s vehicle, which police towed away from in front of the pizzeria.

After his arrest, Welch told police he was there to investigate a fake news conspiracy theory known as “pizzagate” involving the pizzeria in the 5000 block of Connecticut Avenue NW. Posts to Facebook and Reddit claim Comet was the home base of a child sex abuse ring run by former Secretary of State Hillary Clinton and her presidential campaign chair, John Podesta.

So, we’re supposed to believe that he went there “investigating” with an assault rifle, and fired one shot into the floor at no one? That sounds totally credible. It actually raises the question: who hired Edgar Maddison Welch to play the part of an armed and dangerous conspiracy theorist? He’s a failed actor listed on IMDB. It wouldn’t surprise me at all if Alefantis himself hired the guy to “attack” his own restaurant. 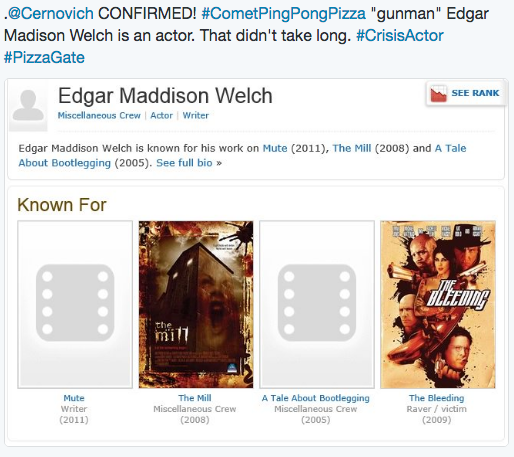