It’s difficult to describe just how weird this band is, but let’s give it a try: Three young Japanese women dressed in matching black frilly party dresses, doing choreographed dance moves and singing — in Japanese — in front of a hard metal band, all of whom are dressed in ankle-length white robes and wearing white face paint. Someone described the resulting sound as Elmo fronting Metallica, but that doesn’t quite capture the weirdness of Babymetal. When the band broke into a couple bars of “Sweet Home Alabama,” maximum weirdness was achieved. Oh yeah, the Red Hot Chili Peppers were there, too.

Light shows aside, did the Chilis get as weird as they used to back in their punk-funk heyday? Nah. These are older, gentler Chili Peppers, distinguished elder statemen of rock, men who cordially invited former drummer Jack Irons to kick off the night with a 20-minute solo set. The group that really brought the battiness was opening act Babymetal, a Japanese pop-metal phenomenon combining an assembly-line girl group with white-robed thrash metal demons. Technically engrossing, in terms of both metal musicianship and ritualistic choreographic discipline, it was exactly the sort of fantastical freak show that might’ve accompanied the Chilis on some sweaty Lollapalooza back in the day. The heck if they didn’t have the arena lit up and singing on their anthemic Karate.

On the subject of opening acts, Irons’s solo drumming didn’t leave much of an impression on me… but Babymetal? I don’t think I’ll ever forget them. You should do your own poking around about this Japanese girl group/(very) heavy metal band, but let’s just say it’s like Dr. Frankenstein stitched together parts of Britney Spears, Megadeth, Nintendo’s stupidest games, “The Ghost in the Shell” and “Saturday Night Live.” I scratched my head, a lot. I laughed, a lot. But I couldn’t take my eyes off of them, and on the drive home after the show, it was Babymetal I was listening to on Spotify, not the Chili Peppers. Mostly, I think, because I needed to make sure I hadn’t dreamed the whole thing.

J-pop metal group BABYMETAL have parlayed their meteoric rise into tour dates alongside Metallica, Guns N’ Roses, and Red Hot Chili Peppers. Now, they’ve announced plans for their very own Five Fox Festival set to take place in Japan over nine days this summer. In an interesting twist that could only come from BABYMETAL, there are strict conditions required to attend each of these dates. Specifically, the festival is broken down into categories by age group, gender, and dress code. For example, one date is reserved exclusively for males, another for females, and another for teenagers. Even more randomly is the day when only elementary school children and people over the age of 60 (um, what?) will be granted admittance.


I have to admit, this is the most tempted I have been to return to Nagoya in decades. 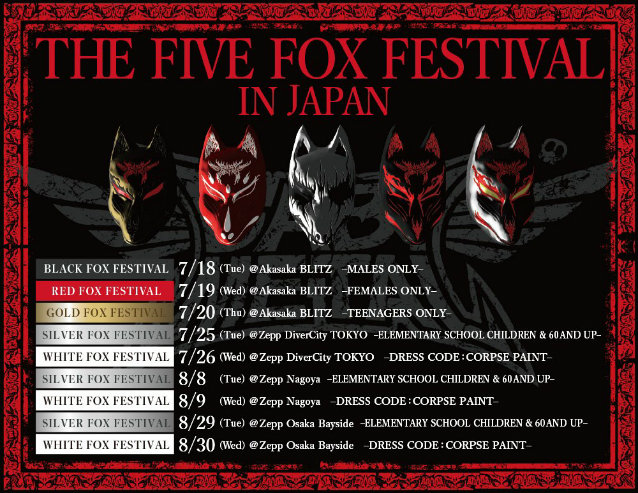