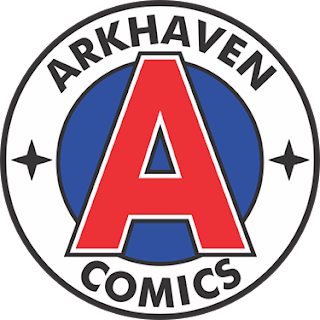 Arkhaven is the new Castalia House imprint which will be responsible for publishing comics and graphic novel series like Alt★Hero, Alt★Hero Avalon, QUANTUM MORTIS, and Wodehouse, among others. It will be publishing in both digital and print editions, and we’re pleased to announce that the first Arkhaven digital comic is now available today.

QUANTUM MORTIS A Man Disrupted #1: “By the Book”

Chief Warrant Officer Graven Tower is a ruggedly handsome military policeman who hates aliens. Fortunately, as a member of His Grace’s Military Crimes Investigation Division – Xenocriminology and Alien Relations, he gets to arrest a lot of them. Sometimes he even gets to shoot them.

But while he doesn’t like aliens, Chief Tower does very much like Detector Derin Hildreth of the Trans Paradis Police Department, who is unmistakably human. So when Tower has the chance to investigate the mysterious murder of an alien on the streets of Trans Paradis with her, he’s not about to miss the opportunity. Especially when their mutual investigation just might give him the excuse to shoot an alien or three.

Issue #1 is 28 pages, retails for $2.99 at Amazon, and is available on Kindle Unlimited. If you want to check out the interior artwork, click inside and you can see the first few pages. The style is very retro Dick Tracy, which is decidedly out-of-fashion today, but then, it also lacks transgendered minority deviants, disturbing and inappropriate portrayals of children, and endless social justice advocacy. We did say we were going old school, you may recall.

UPDATE: Thank you all for the enthusiastic support!

The first 24-page print edition will be available in February and we’re planning to have Issue #2 out in digital then as well. Since we’re new to producing comics, we’re using the QM series as a point man of sorts in order to avoid making any serious mistakes with Alt★Hero production. But no worries, we are still on track to have three of the first A★H digital editions out to the backers in February.