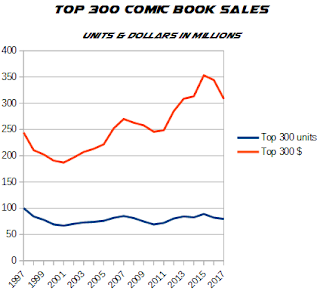 Now that the year-end results are in, we can take a look at the current state of the conventional comics industry. The data is flawed and incomplete, but vastly better than the data we use to analyze GDP or trade statistics, so it’s a useful illustration of how the industry has changed over the last 20 years.

First and foremost, what this tells me is that ALL of the perceived growth in the market has been the result of price inflation. In 20 years, dollars are up 26.2 percent while unit sales are down 20.5 percent. Taken in combination, that is a very close match to the 56 percent inflation reported over the same time period for the Consumer Price Index. For all that fans understandably complain about 20-page books and the rise to $3.99 prices, the industry actually hasn’t kept pace with general consumer inflation.

Second, the initial decline was the result of Marvel’s failed attempt to enter the distribution business that was followed by Diamond establishing its monopoly over the comic book stores. My surmise is that the slow recovery in unit sales, from 67 million in 2001 and 69 million in 2010, is largely the consequence of Diamond using its monopoly position to force overstocking on the stores. (Remember, even though the dollars reported are retail, these units represent Diamond’s sales into the stores, not actual sales to the final consumer.) This forced overstocking puts increased financial pressure on the stores and leads to periodic store failures. Given that 50 stores, representing between 1.5 and 3 percent of the total number of stores, failed in 2017 alone, that means those previous unit sale bottoms will probably be tested in 2019.

This store failure cycle will likely be exacerbated by the steep dollar decline from 2015, which is almost certainly reflective of the SJWs at the Big Two getting out of hand and reducing demand for the highest-priced comics that have been affected by their antics. Diamond’s distribution policies are currently mitigating the effects of that reduced demand, but it is likely to start showing up in 2018. I would expect Top 300 unit sales to fall to 72 million next year; if they go below 70 million, things are going to get worse faster than anyone in the industry probably anticipates.

Past declines in unit sales exceeded the percentage decline in dollars. But since 2015, that relationship has been reversed, with dollars down 12.7 percent from 2015 to 10.6 for units. That means that it is the elite products that normally drive industry demand that are suffering the biggest decline.

This is an industry that is more than just ripe for disruption, it is practically screaming out for it. It’s not dying, it is merely changing. And with your help, that’s exactly what we’re going to do: disrupt and change the industry. Note that with 494 copies sold, that would be enough to put Will Caligan’s first graphic novel at #198 on the December 2017 chart. Three not-entirely-unrelated notes: