Last night’s Hugo Awards ceremony featured a significant first: Nora Jemisin became the first novelist in science fiction history to win three consecutive Best Novel Hugos, once for each volume in her Broken Earth trilogy (the concluding volume, The Stone Sky, won last night’s prize); in addition to the unprecedented honor, Jemisin had another first, with her acceptance speech, which may just be the best such speech in the field’s history.

Other works and creators honored last night include:

Moving. Deeply moving. (wipes a solitary tear away) You lift that massive shining rocket-shaped finger to the sky, you inspiring token for the savagely untalented! No one can ever take away those unprecedented three consecutive Best Novel Awards from you, although they’re desperately going to want to do so once they realize just how completely they have destroyed the credibility of their own awards.

You see, my dear SF-SJWs, this is what a smoking hole looks like. 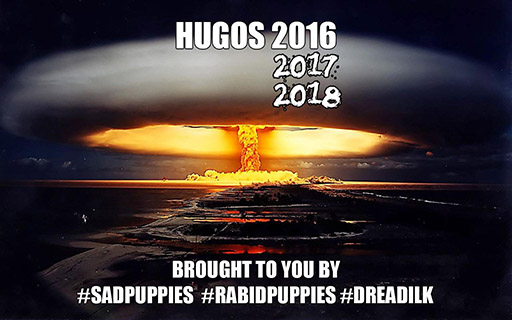 I have not read the Jemison books.  Perhaps they are wonderful works of science fiction deserving of Hugos every year from now on. But in her graceless and vulgar acceptance speech last night, she insisted that she had not won because of ‘identity politics,’ and proceeded to disprove her own point by rehearsing the grievances of her people and describing her latest Hugo as a middle finger aimed at all those who had created those grievances.

But that’s what the Hugo Award is now. And that is all it is. Which is exactly what I told the Rabid Puppies would happen. Our actions could never have sufficed, but their reactions did.