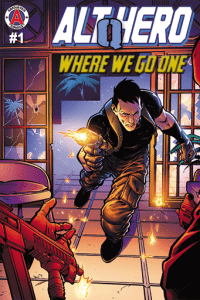 This is the final day of the Alt-Hero Q campaign, so if you’re interested in getting on board, this is your last chance to do so.  Remember to turn off NoScript if you’re placing an order! Thanks very much to all 1582 backers of the three components of the campaign; this has proven to be a more successful, and more significant, crowdfunding campaign than we had ever anticipated.

Arkhaven still has a long way to go before we can set the cruise control, but we are systematically putting the infrastructure in place for consistent long-term success and we really appreciate the way Arkhaven’s backers are continuing to make that posssible.

In other news, QMAMD #4 and #5 are being completed, Swan Knight’s Saga #1 is almost ready to go to the letterer, and the first Premium editions of Alt-Hero as well as the first Alt-Hero novel will be published in January.

And, of course, the complete Right Ho, Jeeves omnibus edition is now available in a beautiful 152-page paperback that includes all six individual issues.

UPDATE: A high-level back of AH:Q shares his thoughts about backing the original campaign at the digital edition level:

I had no idea it would be so good and really regret only supporting for digital editions. Since then, I have gone for all the editions on the Alt-Hero: Q, during the silent campaign