Neon Revolt has a plan, courtesy of DirectorAnon:

Most of my readers will know by now that I spent a considerable amount of time in Hollywood, trying to work my way through the ranks, only to be stifled by the identity politics quickly taking root out there during the Obama years.

But the second I read this, I almost jumped out of my chair. I knew immediately that #DirectorAnon wasn’t LARPing, because of this post alone.

It’s almost hard for me to explain to people who haven’t lived and experienced anything out there, but film and TV are basically a two-tiered caste-system.

Those above, are the head-honchos. The director, the actors, the writers, the producers. They’re called “above the line” because… basically, they get access to royalties and such in their contracts.

Everyone below the line –  the crew, the gaffers, the technicians, etc… They’re all paid hourly. It’s real grunt-work, but it’s the kind of stuff that has to get done, in order for a production to happen. After all, someone has to build the sets, set up the lights, rig up the mics, have craft services ready for when everyone gets hungry, etc, etc, etc.

and IATSE is THE union controlling all these guys.

Every single studio production, be it film or TV, works with IATSE labor. That’s just the way it works out in Hollywood. Every studio is legally bound to use them.

IE: The exact demographic its okay for all these monied, soft-handed execs like Franklin Leonard to hate on so much.

What DirectorAnon is proposing here is a mass IATSE walkout.

In other words, what he’s proposing would completely shut Hollywood down. 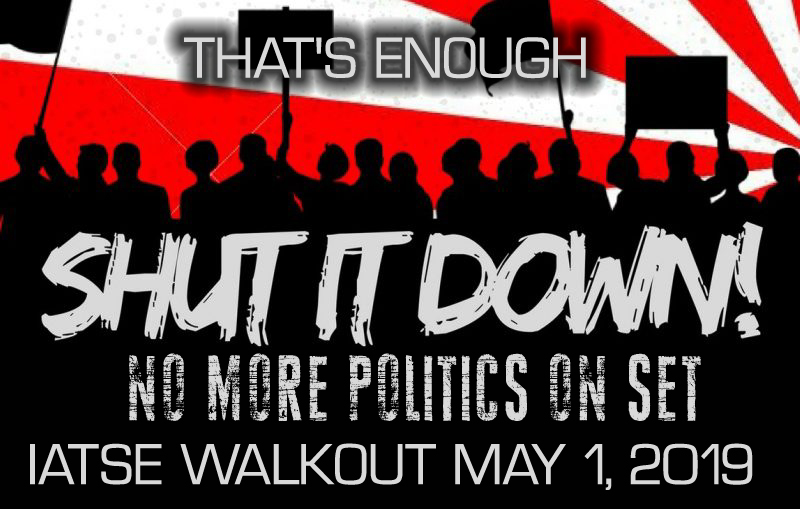 In the meantime, a crew man, GafferAnon, explains what you can do to shut down the Pedo Palace:

Make the money dry up.
Stop going to the movie theaters.
Stop using the products they pimp.
Stop paying to be entertained.

Just stop. Stop buying tickets and then complaining about how they inserted SJW poison into your favorite franchise. Stop making snarky comments and posting negative reviews about movies you paid to see. Stop supporting those who hate you, hate your politics, hate your faith, and hate your nation. Stop funding your own destruction!

I have not been to a movie since The Return of the King came out in 2003. I will never see another Hollywood movie in the theater. Anyhow, be sure to read both linked posts in their entireties, as there is a copious amount of information in them.