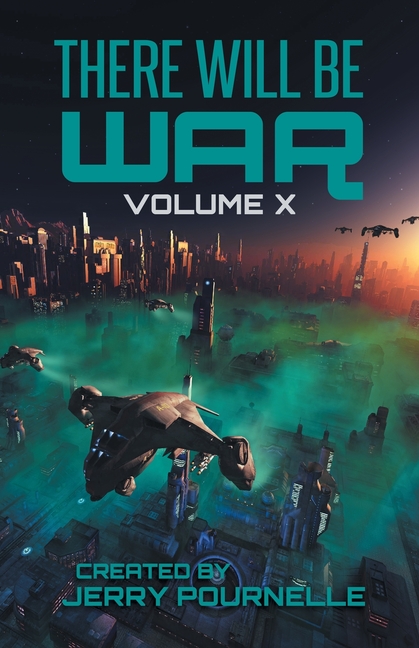 Created by the bestselling SF novelist Jerry Pournelle, THERE WILL BE WAR is a landmark science fiction anthology series that combines top-notch military science fiction with factual essays by various generals and military experts on everything from High Frontier and the Strategic Defense Initiative to the aftermath of the Vietnam War. It features some of the greatest military science fiction ever published, such Orson Scott Card’s “Ender’s Game” in Volume I and Joel Rosenberg’s “Cincinnatus” in Volume II. Many science fiction greats were featured in the original nine-volume series, which ran from 1982 to 1990, including Robert Heinlein, Arthur C. Clarke, Philip K. Dick, Gordon Dickson, Poul Anderson, John Brunner, Gregory Benford, Robert Silverberg, Harry Turtledove, and Ben Bova.

25 years after the end of the Cold War and the publication of the ninth volume, Dr. Pournelle has revived his classic science fiction series with Castalia House. THERE WILL BE WAR Volume X, History’s End, continues the tradition of combining top-notch military science fiction with first-rate real-world analysis by military experts. The Cold War may have ended, but as recent events everywhere from Paris to Syria have demonstrated, war has not.

THERE WILL BE WAR Volume X is edited by Jerry Pournelle and features 18 stories, articles, and poems. Of particular note are “Battle Station” by Ben Bova, “Flashpoint: Titan” by Cheah Kai Wai, “What Price Humanity?” by David VanDyke, and the eerily prescient “The Man Who Wasn’t There” by Gregory Benford. Volume X also includes timely essays on “War and Migration” by Martin van Creveld, “The 4GW Counterforce” by William S. Lind and LtCol Gregory A. Thiele, USMC, and “The Deadly Future of Littoral Sea Control” by CDR Phillip E. Pournelle, USN, which was awarded the 2015 Literary Award by the Surface Navy Association for “the best professional article in any publication addressing Surface Navy or surface warfare issues.”

In other Castalia House news, the new case laminate hardcover edition of John C. Wright’s instant classic AWAKE IN THE NIGHT LAND is now available for $24.99 from Castalia Direct or $27.99 from Amazon. This is an epic collection of four of John C. Wright’s brilliant forays into the dark fantasy world of William Hope Hodgson’s 1912 novel, The Night Land. Part novel, part anthology, the book consists of four related novellas, “Awake in the Night,” “The Cry of the Night-Hound,” “Silence of the Night,” and “The Last of All Suns,” which collectively tell the haunting tale of the Last Redoubt of Man and the end of the human race. Widely considered to be the finest tribute to Hodgson ever written, the first novella, “Awake in the Night,” was previously published in 2004 in The Year’s Best Science Fiction: Twenty-First Annual Collection. John C. Wright has been described by reviewers as one of the most important and audacious authors in science fiction today. In a recent poll of more than 1,000 science fiction readers, he was chosen as the sixth-greatest living science fiction writer.

THE MILO CHRONICLES by Dr. Rachel Fulton Brown are also available for $29.99 from Castalia Direct or $34.99 from Amazon.