Or is, at the very least, a developmental disorder linked to genetic causes:

The largest genetic sequencing study of autism spectrum disorder (ASD) ever conducted has found 102 genes associated with autism, a major step towards an eventual cure, which may involve genetic manipulation. Most of these 102 genes were expressed in the brain, and affect synapses or regulate other genes. This means they have important roles in switching other genes on and off.

Furthermore, 49 of these genes are also linked to other developmental disorders, underlining the fact that the neurobiology of many such conditions are likely to overlap.

I first postulated my hypothesis concerning a link between the autism spectrum and atheism back in  2007 in response to a post by PZ Myers at Pharyngula in which he and other atheists were bragging about their relatively high Asperger’s Quotient scores. I wrote: “Obviously, more comprehensive and scientific tests would be advised before any definite conclusion can be reached, but these initial observations do appear to indicate a possibility that atheism could be nothing more than a minor mental disorder.”

Since then, at least two scientific studies that were directly inspired by my hypothesis have found that there is a statistical correlation between atheism and the autism spectrum.

This new study indicates – it does not yet prove, but it indicates – that scientists will eventually be able to find a link between those 102 genes and atheism, which suggests that it is atheism, not religion, that will one day be cured by science. One should note that this genetic link also explains why atheism has never propagated very successfully from one generation to the next, as atheists tend to be very unfit in the evolutionary sense of natural and sexual selection.

So, don’t be bothered by your shower-averse, science-loving, fedora-sporting acquaintance who insists on quoting Richard Dawkins at everyone apropos of nothing. Just assure him that he does well to trust in science, as one day science will cure his genetic developmental disorder.

Everyone on both sides is perfectly aware that the impeachment is Fake News, which is why no one is interested in the “historic” event:

The Senate spectator gallery was at least half-empty throughout the first week of President Donald Trump’s impeachment trial and senators serving as the jury in the marathon sessions are taking notice — some stunned that there aren’t more people watching history unfold, while others understand the public avoiding the repetitive proceedings.

“I’m really surprised at that because this is kind of historic and I would think this would be an opportunity for people to get in there regardless of whose side you are on,” Sen. James Inhofe (R-Okla.) told The Post Friday.

So, the Democrats lied about a lot of things, nothing is going to happen, and no one is going to pay any attention to stories about how you were there. And, on top of all that, it requires listening to a bunch of old people blathering on and on. There is literally nothing to appeal to anyone.

I’m surprised the gallery is anywhere close to being half-full.

Corona-chan offers yet another powerful argument against globalization, open borders, and the free movement of peoples. Plus, a guide to ensure the good favor of Corona-chan: 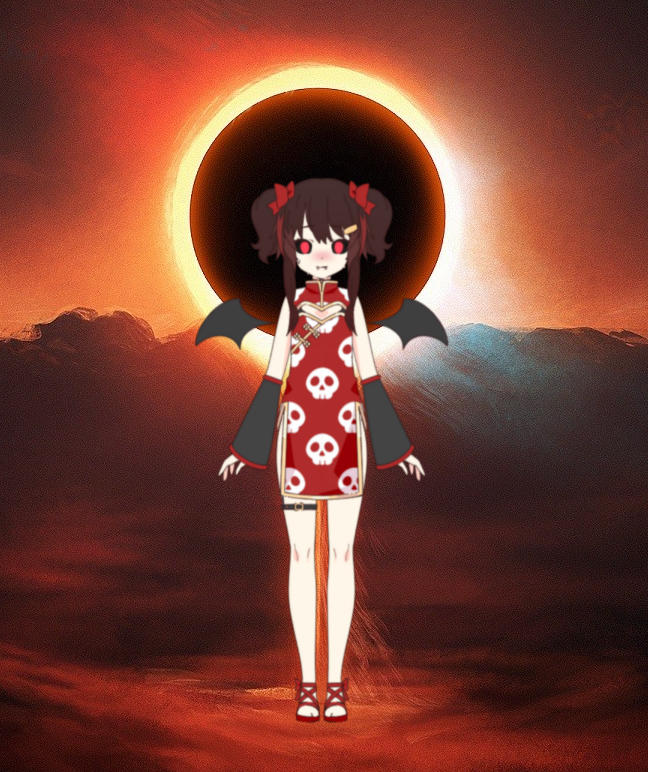 All in all, it strikes me as a good time to get caught up on the writing. Back to Selenoth….

UPDATE: Doesn’t evacuating people from a hot zone tend to violate the primary objective of a quarantine?

The US, which has around 1,000 citizens in the city, is set to evacuate those it knows about – including diplomats – on a 230 seater charter flight tomorrow.

Why not simply declare those 1,000 citizens to be New Chinese, every bit as Chinese as the other residents of Wuhan, and leave them to bravely face the Mandate of Heaven with their fellow Chinese.

No wonder the neoclowns have been clamoring incessantly for war with Russia. They recognized, before anyone else did, that their “hello, fellow Russians” jig was up:

Dual citizens and holders of foreign residency permits will now be barred from holding official positions within the Russian Federation. In addition, 25 years of Russian residency will be required of anyone running for President instead of the current 10. This may seem like a minor change, but it is causing Russia’s fifth-columnists and members of the liberal opposition to tear their hair out while gnashing their teeth because most of the current ones will be automatically disqualified from holding office while any future ones will be forced to choose between serving Russia and having a bug-out plan.

More specifically, given their new outsider status, their Western masters will consider them useless and will no longer funnel funds to them or offer them free regime change training. This approach is sure to be more effective than the current, more labor-intensive one of playing whack-a-mole with foreign-financed NGOs and foreign agents attempting to infiltrate Russia’s government.

The United States and other Western governments desperately need to enact a similar law. Ideally, even being eligible for dual-citizenship would disqualify a citizen from holding office or working for the national government.

Not on the god-emperor’s watch:

President Donald Trump has sent a clear message to lawmakers in the Democrat-controlled state of Virginia, warning that he will not allow them to undermine the Second Amendment rights of American citizens while he’s in office. Speaking during an interview with Fox News Wednesday, President Trump warned Democrats that a gun grab “will never happen as long as I’m here.”Virginia’s state Assembly and Senate came under Democratic control following wins in the 2019 elections.

In conjunction with the Democrats who control the state’s executive offices, Dem officials immediately pushed forward with plans to legislatively impose strict gun control measures upon law-abiding gun-owners in the state. Virginians have been rising up in response, and on Monday, tens of thousands of gun owners and Second Amendment supporters marched on the state capitol in Richmond in opposition to the coming gun-control measures.

No wonder the Swamp is desperate to try to get him out of office. But while it’s good to see that so many Virginians are willing to demonstrate and work within the political system to defend their Second Amendment rights, it’s important to remember that if those efforts fail, those guns will have to be used to defend the unalienable rights of their owners.

At some point, sooner or later, the Democrats are going to call what they believe to be a bluff. And that’s when we’ll find out if the Tree of Liberty will survive or not.

Whoever could have seen this ratings collapse coming?

Doctor Who is the need of a defibrillator as the show continues to have one foot in the grave as its latest episode is the worst viewed in 31 years of its 57-year history.

Sunday’s episode, “Nikola Tesla’s Night of Terror,” was only watched by 4.04 million viewers in the UK.

We have to go way back to Season 23 of September, 1986 to see a lesser amount of viewers as “The Mysterious Planet” Part Four only had 3.7 million viewers tuning in.

Sunday’s episode of Doctor Who is also the eighth least-watched episode of the entire run which kicked off in 1963, and the lowest watched of the new series.

The numbers for Doctor Who have gone down consistently with each new episode as the series has lost near one million viewers since the debut episode for Season 12 on New Year’s Day.

As usual, everyone and everything will be blamed except the true culprit: the corporate cancer of convergence. Note that the usual drop of 20 percent in the first year has been achieved.

The Kurgan lays out a logical case for Sede Privationism for nominal Roman Catholics:

In order to make this very simple and to show that there is literally not a single valid refutation to the position of Sede Privationism, I have constructed the below logical argument.

Axiom: The Catholic Church is the true and Valid Church instituted by Jesus Christ on Earth. This is the assumed starting axiomatic point. That is, regardless of if you personally agree or not with it, for the purposes of this argument it is assumed to be true and correct as our starting point.

Question 1. Is the Pio-Benedictine code of canon law of 1917 the legitimate code of Catholic Canon Law that was legitimately and correctly put together by the Church?

If No, demonstrate this with specificity and exhaustive proof.

Question 2. The Vatican II documents are 16 documents produced between 1963 and 1965. Do you agree that in every case these documents contain heresy that is not in keeping with the doctrine of the Catholic Church from the start to at least 1958?
Reference:The Heresies of Vatican II

If No, you’re probably a vile heretic yourself, but go, on, try and refute even just the linked reference document IN DETAIL and specifics. Honestly, you can’t because facts are facts and objective truth exists.

Those are just the first two questions. There are four in all. Read the whole thing there, if it is a matter of concern to you. Being a non-denominational Christian, I’m not particularly interested one way or the other; it seems readily apparent to me that the current so-called “Pope Francis” is about as genuinely a legitimate Christian bishop as I am the President of the Milky Way Galaxy.

The media is already reeling. There is no reason not to pile on and add to their financial struggles when they attack, either directly or indirectly through weaponized defamation.

At the end of 2019, McClatchy, the media conglomerate that owns the Miami Herald and El Nuevo Herald, announced it would stop printing Saturday editions of the newspaper and run extended “weekend editions” instead.

As it turns out, beginning April 26, those newspapers will also no longer be printed in Miami-Dade County or by Miami Herald employees. Herald publisher and executive editor Aminda “Mindy” Marqués González last night announced in a companywide memo that the Herald is closing its Doral-based production plant and will instead print six days’ worth of newspapers at the Sun Sentinel’s press in Deerfield Beach. The Herald built its Doral printing plant eight years ago after McClatchy sold the daily’s longtime headquarters overlooking Biscayne Bay to the Malaysian gambling company Genting, which then demolished the building.

With a very few exceptions, such as the Jeff Bezos blog aka Washington Post, the media cannot afford to fight. This is the perfect time to counterattack.

It is with great sadness that I bring you the announcement that the owner of Superversive Press has made the decision to shutter the press. His reasons are his own and personal, and I understand that running even a small company is a large amount of work.

It’s much harder to run a small independent press than most people, even most writers, understand. And doing so since the advent of Kindle Unlimited, which reduced the ebook market by about 80 percent, has made it next to impossible.

That doesn’t apply to Castalia House, however. We intentionally set it up as a zero-risk structure that will keep running, more or less automatically, regardless of what just about anyone, including us, does in the future. And, of course, we have been aggressively exploring other markets, which has tended to strengthen our core business. But our biggest strength is our modestly-sized, but fiercely loyal base of our regular readers.

So don’t worry about Castalia. I can’t say for certain that things have never been better, as we did have a really good moment there in 2017 before the bottom dropped out of the ebook market, but things have definitely never looked more promising.