On last night’s Darkstream, I was extremely pleased to announce that the first book in the Castalia Library, The Missionaries by Owen Stanley, has been printed and bound. It will begin shipping on Friday. Below are three pictures of the very first book that was completed at the bindery yesterday. 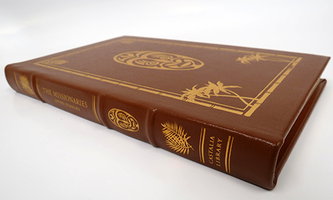 Unfortunately, since the first set of goatskins did not pass the rigorous quality standards required by the bindery, the Libraria books are not ready. We do not know when they will be ready because the second set of goatskins are still in Italy. So, we are sending a free Library edition of The Missionaries to all Libraria subscribers now, and will send the elite goatskin editions out as soon as they are ready. Due to the slim nature of the volume, we elected to go with a vertical alignment of the title on the spine, as Franklin Library did with books like Machiavelli’s The Prince and Shakespeare’s Poems, although we followed the example of the two-line approach of the latter as we felt it was more attractive than the single-line approach of the former.

In the third image, you can see how the endpapers feature a map of the archipelago that contains the fictional Elephant Island, which features a little Easter Egg for those who enjoy maps. You can also see the gilding on the pages as well as the gold ribbon bookmark. A number of people have asked if there will be copies available for purchase; as we are only producing 500, there are a few still available but they will be offered first to Castalia Library subscribers at the subscription price with the exception of two copies that will be offered at the retail price of $150 on Abe Books. If there are any left, they will be offered at the retail price at Arkhaven. 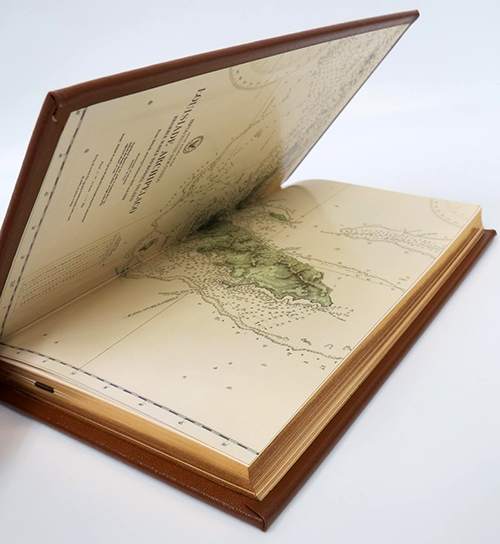