We have removed all videos from the old system and will be shutting down the apps this week. We will keep the site there for the purposes of the subscription system – so until further notice, please keep subscribing there – but all video watching should be done via the new site. We will also move the UNAUTHORIZED.TV URL to the new site this week and change the existing one to something else indicative of its current function.

We will start working with those having invite and login issues tomorrow in a methodical and systematic way. We will also begin work on the new apps this coming week.

Those dratted socialists nearly beat a man to death on camera in Dallas.

As looting and mayhem gripped the streets of Dallas, Texas, a mob descended on a man allegedly defending his neighborhood with a long blade. Punched, kicked and pelted with rocks, the man was left mangled and bloody.

I tend to suspect the beaten man was a relatively recent arrival in Dallas. I mean, what sort of Texan defends a shop, or anything else, with anything but a gun? Or is clueless enough to rush a rock-throwing mob by himself?

Those gosh-darned socialists were at it again in Rochester, New York.

UPDATE: At least the President is finally ready to take down Antifa.

The United States of America will be designating ANTIFA as a Terrorist Organization.
– Donald J. Trump

Sarah Hoyt demonstrates why even those who appear to be more or less ideologically inclined to the Right are not genuinely on the side of America, Western civilization, or even the simple truth:

The good news is that we, as a society, have been wealthy enough for long enough to have raised a whole bunch of toddlers in adult bodies (most of which are the very white kiddies of antifa. Don’t let anyone tell you this is a race riot. This is a socialist riot. A series of them.)

Nothing, literally nothing, can stand in the way of the Paper American’s desperate need to believe that she isn’t Portuguese, she is a true, blue American, every bit as American as any Son or Daughter of the American Revolution. Because thanks to over a century of propaganda, most “conservatives” now believe that “America” isn’t an actual nation, it’s nothing more than an idea that anyone can claim.

Now, I grew up in Minnesota. I spent six years at, and graduated from, a Minneapolis school within walking distance of the epicenter of the riots at Hiawatha and Lake. I finished third in the 200m in the Region V (aka Minneapolis) championships behind a pair of sprinters from Minneapolis North, one of whom was a bona fide Disciple. I have very good friends who are living right smack dab in the middle of all this, fervently hoping that all the attacks on retail outlets and public institutions don’t turn into home invasions.

And it most certainly is a race riot.

The fact that Antifa is taking advantage of the situation and is attempting to fan the flames of the local race riot into a national one does not change the fact that none of the chaos and destruction would have taken place if George Floyd had been Asian or if Derek Chauvin had been Black.

Civic Nationalists always lie, but one of the differences between them and SJWs is that the Civic Nationalist’s first victim is always himself. Or, in this case, herself. But regardless of her reasons, the fact is that Sarah Hoyt is a shameless liar.

Owen’s Livestream 849, which explains psychological spells, how to identify and break them, and how they are connected to rhetoric and dialectic, is arguably one of his most important streams to date. What he’s doing here is extending one of the more important elements of Aristotle’s Rhetoric, in which the great Greek philosopher observed that despite there being no information content in rhetoric, it is most effective when it is based on the truth.

The best rhetoric is true. And the most convincing dialectic sounds like rhetoric. Which is why it is fascinating to observe that despite 2,400 years of comprehensive, in-depth analyses of Aristotle’s philosophy by some of history’s finest minds, we still have no word to identify a useful, important, tremendously effective intellectual concept.

verpunkt = the intersection where Aristotelian rhetoric and dialectic meet and become one.

Lest you think I exaggerate the general failure to utilize the important concepts Aristotle explicates, or happen to be ignorant of any relevant analyses, contemplate the Stanford Encyclopedia of Philosophy’s summary of Aristotle’s Rhetoric:

Aristotle’s Rhetoric has had an enormous influence on the development of the art of rhetoric. Not only authors writing in the peripatetic tradition, but also the famous Roman teachers of rhetoric, such as Cicero and Quintilian, frequently used elements stemming from the Aristotelian doctrine. Nevertheless, these authors were interested neither in an authentic interpretation of the Aristotelian works nor in the philosophical sources and backgrounds of the vocabulary that Aristotle had introduced to rhetorical theory. Thus, for two millennia the interpretation of Aristotelian rhetoric has become a matter of the history of rhetoric, not of philosophy. In the most influential manuscripts and editions, Aristotle’s Rhetoric was surrounded by rhetorical works and even written speeches of other Greek and Latin authors, and was seldom interpreted in the context of the whole Corpus Aristotelicum. It was not until the last few decades that the philosophically salient features of the Aristotelian rhetoric were rediscovered: in construing a general theory of the persuasive, Aristotle applies numerous concepts and arguments that are also treated in his logical, ethical, and psychological writings.

You may recall that I recommended that the God-Emperor declare a state of martial law some weeks back. In that context, this Q post is more than a little intriguing.

May 30 2020 17:11:47 (EST) NEW
Insurrection Act of 1807.
[Determination that the various state and local authorities are not up to the task of responding to the growing unrest]
Call the ball.
Q

Also, never believe The Official Story. Contra the Governor of Minnesota, there are no Boogaloos.

Of the 45 people arrested for rioting and looting on Friday and Saturday in Minneapolis, 38 had Minnesota addresses, FOX 9 reported, citing publicly available jail records. Only six detainees were registered out of state, and one person did not have address information listed.

SF-SJWs on Reddit were optimistic that this was all just a right-wing plot to make them question their allegiance to diversity.

Forget the Alt-Right! The retarded Left has a brand new bogeyman: The Boogaloos!

I was talking to a friend in Minneapolis when a guy pulled up on a motorcycle and explained to him that the violence wasn’t committed by the locals, it was by armed, white supremacists from outside the Twin Cities called Boogaloos who have travelled to Minneapolis in order to provoke a civil war. He’s got friends in the FBI who told him all about them, Governor Walz has even warned people about the dangerous Boogaloo movement, so he was going to visit all the nearby hotels and motels in order to write down the license plates of all the out-of-state cars, then turn them over to the police.

When my friend pointed out that all the nearby hotels and motels are closed due to the coronavirus restrictions, that didn’t even slow him down. He theorized that then these cunning invaders must be staying with local allies and sympathizers, so he was going to ride through the residential neighborhoods and find all the tell-tale license plates.

A reader writes about the manufactured chaos in Minneapolis:

Chaos in Minneapolis last night.  St. Paul my side of the cities was behaved.  The state has the largest enforcement force ever assembled in the state. Around 1500. They protected downtown Minneapolis, the Federal Reserve building, and the power station.  Then the mobile force tried to protect the rest. 1000 more protesters was too many for them.  They were overwhelmed.  They did manage to contain three spots but only after three hours of burning destroyed a bank, a post office, and numerous other businesses.

Intel says that the drug cartels, anarchists, and white supremacists among others have organized and infiltrated the peaceful civil disobedients.  Sound like back in the 60’s when the South blamed outside influences, doesn’t it? However I expect there is a truth in it.  There is a worldwide organized movement to converge here tomorrow.  Expecting one of the largest crowds we have ever seen. I think the governor is going to allow the army to come help. An unprecedented event.

At this rate, it’s only a matter of time before they blame the burning of Minneapolis on me and Big Bear. It’s remarkable how those insidious “white supremacists” have cleverly managed to infiltrate both Soros-funded Antifa and the jogger community. It looks like it’s going to be a long, hot summer now that they are officially up in arms.

Two Federal Protective Service officers were shot – one fatally – during Friday night protests in Oakland, California, as violent protests across the US intensified over the killing of George Floyd.

At least 7,500 demonstrators took to the streets in Oakland last night, clashing with police and sparking arson attacks and vandalism across the city. During the squirmish, two officers with the Federal Protective Service – a part of Homeland Securitycreated to protect government facilities – were shot. Police are investigating.

Meanwhile, a 19-year-old protester was shot dead in Detroit last night, while soldiers in North Carolina and in New York were ordered to be ready to move in within four hours and troops in Colorado and Kansas within 24 hours.

It’s going to get worse, a lot worse, before everyone is ready to accept the fundamental necessity of homogeneous nation-states again, which is the prerequisite for re-establishing civilization. The other option, of course, is Chung Kuo. Try to keep in mind that the fact that you are inclined toward favoring a multi-ethnic global empire doesn’t mean that you’re going to be the one to rule it.

Another Minneapolis friend told me that he and his wife witnessed people literally lining up to take turns looting the Walgreens.

I’m not even remotely surprised by these preliminary findings, given that the position of the police officer’s knee rendered it impossible for him to cut off George Floyd’s air supply:

The criminal complaint filed against Chauvin, 44, cited that preliminary findings from a Tuesday autopsy conducted by the Hennepin County Medical Examiner saw ‘no physical findings that support a diagnosis of traumatic asphyxiation or strangulation’.

‘The combined effects of Mr. Floyd being restrained by police, his underlying health conditions and any potential intoxicants in his system likely contributed to his death.’

As always, remember that the one thing we can be absolutely certain did not happen is The Official Story/ Which, in this case, means Officer Chauvin did not kill George Floyd by kneeling on his neck, for starters. And we can already be highly confident that this coroner’s report means that Officer Chauvin will be found not guilty of third-degree murder, which suggests considerably more jogger violence will take place throughout the summer.

I don’t know about you, but I’m already looking back wistfully at the halcyon days of the Great Lockdown. 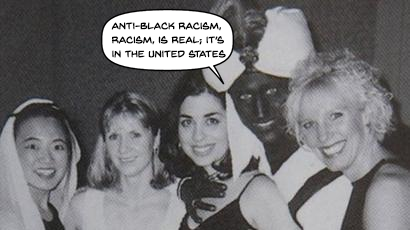