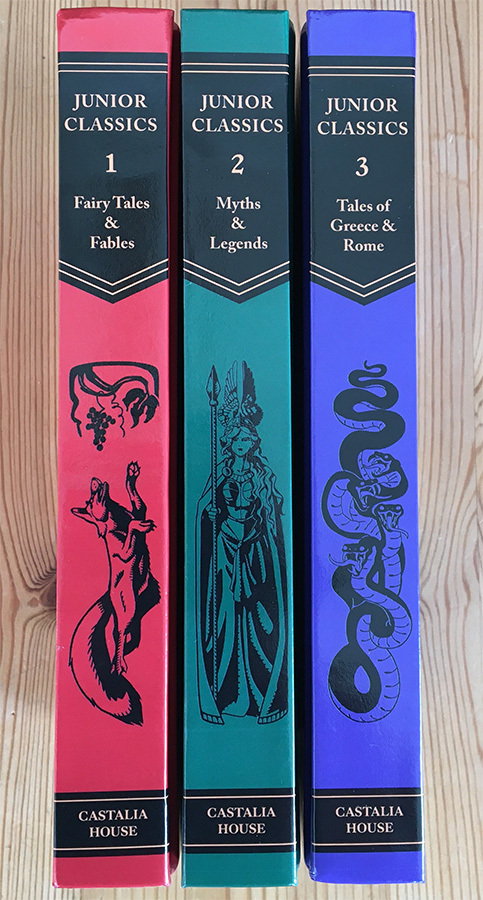 Yes, Virginia, the 2020 edition of the Junior Classics is real at last. While we normally don’t bother printing samples before we ship orders to backers or flip the switch to activate release into the distribution channel, the large number of moving parts involved plus the sheer volume of books to be shipped inspired us to take an uncharacteristically safe approach to the process. Fortunately, our caution turned out to be unnecessary, which is why we have today begun placing the first orders to ship out the initial three volumes to the original backers of the project.

We are very appreciative of the incredible support that made it possible to turn this dream into reality, and also of the patience that allowed the production team to ensure that the project was done right.

The 2020 Edition of the Junior Classics features dozens of stories, even more classic illustrations, and the original artwork of Arkhaven’s Lacey Fairchild, and we are confident that this edition will come to be considered the definitive edition.

From the Preface to the 2020 Edition

For more than one hundred years the Junior Classics have been one of the great resources for teaching children to love reading and providing them with a lifelong taste for the Western literary canon.  These handsome books, containing short stories and selections from classic Western literature, have been passed down through the generations in many families, introducing boys and girls to Aesop, Homer, Bulfinch, and Virgil, and to Cervantes, Dickens, Poe, and Twain.

Wrapping time-honored tales in bright-colored covers, the Junior Classics proved irresistible to young readers over the years, reaching their aesthetic peak with the 1958 edition. Unfortunately, it was also then that the intellectual rot began, leading to the eventual demise of the series. A comparison with the 1918 edition reveals a methodical excision of the elements of Christianity and Americana that established the Junior Classics so firmly among God-fearing American families in the early part of the 20th Century. This process of secularization and intellectual enervation culminated in the 1992 edition, a literary abomination that further eviscerated the content and lowered the reading level to that of the barely literate. The title of the first volume, Let’s Read Together, amply demonstrates how a set of books intended to be read by children to inspire in them a love for quality literature devolved into books meant to be read to children to indoctrinate them.

Having witnessed the effect of the traditional Junior Classics on the reading habits of our own children, and observing the lengths to which homeschooling parents were willing to go to obtain the older books, we launched a crowdfunding campaign for the creation of a new edition of the Junior Classics, one that recaptures the spirit and purpose of the original.