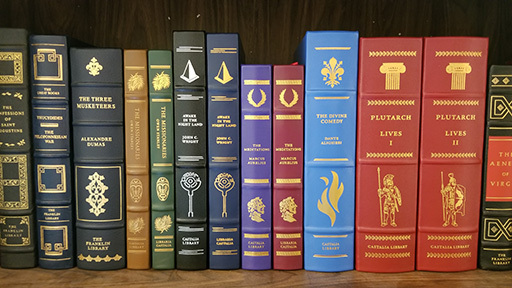 This Castalia Library subscriber has clearly been blessed by the shipping gods. But it offers conclusive evidence to support the idea that the Castalia Library can stand shoulder-to-shoulder with the Franklin Library without shame. First, while the bindery’s new shipping system appears to have sorted out the international issues, we’re still in the process of figuring out the past problems, which is why both the Library and Libraria editions of THE DIVINE COMEDY are now out of stock. We need to make sure we’ve got sufficient quantities of both in hand just in case any shipments that went awry are lost.

Second, HEIDI is being printed now, and will almost certainly ship before SUMMA ELVETICA. Producing a signed edition seemed like a good idea at the time, but has introduced various complications and delays that we would have been wiser to avoid.
Third, for the next week, you can order the complete set of the Junior Classics in leather, or if you prefer, volumes one through three in leather. We’re about to print the first three volumes and place orders for the leather, so we need to determine the final numbers. If you still haven’t received the regular hardcovers yet, this is neither the time or the place to inform us of that, as we’re going to work on that issue the week after next.
And fourth, the current Library subscription book for May-June is DISCOURSES ON LIVY by Niccolo Machiavelli. This is, in my opinion, by far Machiavelli’s most important work, far surpassing both THE PRINCE and THE ART OF WAR in its historical and intellectual significance. I’ve read it in both Italian and English, and we’ve chosen the 1882 translation by Christian E. Detmold for its accuracy and clarity.
Finally, you can now order RHETORIC by Aristotle as a one-off. Subscriber discount codes are already valid.