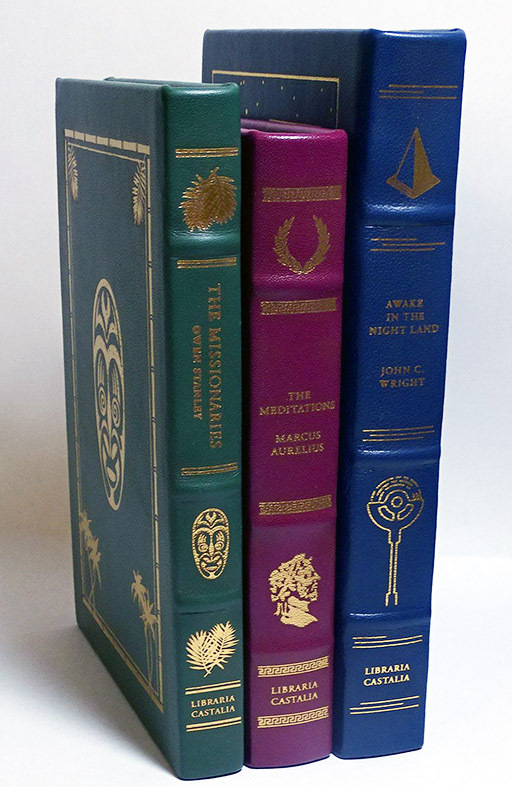 It’s interesting to observe how the real 22k gold is actually less shiny than the gilding used on the Library editions. We’re also learning that the goatskin dyes tend to turn out a little more subdued than the cowhide dyes; we’d expected the midnight blue of AWAKE to be a little darker. But regardless, the results have exceeded our original expectations.
There is still time to subscribe for Plutarch; the November/December book will be Summa Elvetica. We’ve decided that all the Selenoth books will feature the same blue for the Library and very dark green for Libraria. 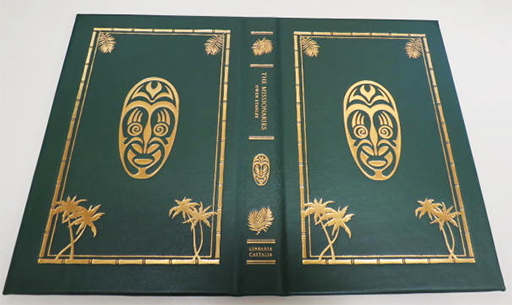 This first Libraria Castalia book is now being belatedly bound in fine Italian goatskin. And yes, that is all genuine 22k gold, it’s not just on the spine. The books are going to look absolutely spectacular and they are already sold out. However, there are still some copies of AWAKE IN THE NIGHT LAND and THE DIVINE COMEDY available. They retail for $500, but subscribers can buy one copy each at the subscription price. Both Libraria editions will also be bound soon, along with the Library edition of the Dante.

We’re running a little late on the first three Junior Classics hardcovers, so they won’t ship before the end of this month but they will be out in plenty of time for Christmas.

VD: Guess how many square feet of goatskin I had shipped from Italy to Tennessee this morning.

That took place in the aftermath of the news that the goatskins for the Libraria Castalia editions of THE MISSIONARIES, THE DIVINE COMEDY, and AWAKE IN THE NIGHT LAND have all been tested and passed the finish quality test as well as the gold foil and 22k gold stamping tests. We anticipate – we don’t promise, we anticipate – all three editions shipping to subscribers and purchasers by the end of October.

Below is an image of the test results sent to me by the bindery. The bright detailed design is the gold foil stamp, which is used to test the ability of the leather to hold detail even though we don’t use any foil on the Libraria editions. The square blocks are the 22k gold stamp, which is not quite as bright as the foil, and explains why the Libraria covers look more subtle than the Library or Easton Press covers. 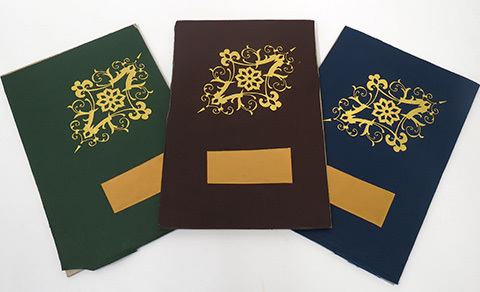 A message from our sponsor:

During our long months of social distancing we started to realize the value of other humans. After weeks of eating expired dippin’ dots and watching 90’s romcoms alone while talking to a gecko on the wall, being around other humans started to seem like a good idea. Especially once we realized that the gecko had been dead for at least a month, presumably from a bad batch of bat soup.

His name was Bobby. We buried him in a tiny mask.

This was the turning of the tide. It is time to reach out again, as we now realize in our heart that all humans are special, even those that support us at the lowest tier possible. And so, we embrace every patron because we know your real value, and not because we may feel vaguely guilty over completely blowing off last month for perfectly valid medical reasons concerning social and temporal distancing.

So, to all of our patrons, this month we will give you more than you ever asked for. With the gracious permission of the author, for July and August we are giving every patron the download codes for both the ebook and audiobook productions of both The Lawdog Files and The Lawdog Files: African Adventures.

The coupon will expire September 15, 2020, so you still have several weeks left to become a Castalia patron and avail yourself of what Squeaks the pygmy mongoose himself would swear was the most excellent opportunity since that magic day that Ali Cheap-Cheap dropped a burlap bag of “beef” on his personal residence.

This is not a mockup, this is a photo of the actual stamped and silver-foiled cowhide from the bindery. The interior cases have been printed for weeks, and I’m told that the bindery expects to ship the third book in the Castalia Library series to both US and international subscribers by the end of the month.

However, we’re still very much delayed on the Libraria versions, as the goatskin tannery went from lockdown to August vacation with barely a few weeks in between. I’m told they expect to ship all the goatskins for The Missionaries, Awake, and The Divine Comedy to the bindery during the third week of September, and we will keep you informed on the progress of those books. This is the downside of working with Italian suppliers; the quality is excellent but they work on Italian time.

The cowhide tannery is on vacation too, so the soonest we can reasonably expect to ship the Library version of The Divine Comedy is the end of September. We’re still finalizing the cover design, but, the interiors have already been printed, and we’re sending the first volume of Plutarch to the printer by the end of this weekend.

Please understand that the production disruptions caused by Corona-chan have not come to an end by any means, and that we are not sitting on our hands, but are actively working to keep routing around them. For example, we had originally planned to produce the Plutarchs in a larger size, but 6 x 9 is the largest paper size that the printer can currently obtain in the quality that we require. So, we adjusted our designs and proceeded accordingly. And, obviously, the delay in producing the Library books has pushed back the Junior Classics, but we’re hoping to at least get the ebook and regular hardcovers out before the end of the year.

In other Library news, the two Plutarch volumes are going to be monsters of around 768 pages each. The covers are going to be very cool and reflective of the dual Graeco-Roman nature of the text. We’ve also decided on Books 7 and 8, although we have not yet decided on the order. They will be Summa Elvetica by Vox Day and Politics by Aristotle. If you have a preference as to which you’d like to see released first, please let us know in the comments.

In other news, Mutiny in Space by Rod Walker is the May Book of the Month and The Divine Comedy by Dante Alighieri is the 4th book (May-June subscription) in the Castalia Library series. It will be a limited edition of 750.

In other project news, we have decided that the fourth book in the Castalia Library series will be Dante’s The Divine Comedy, complete with woodcuts from the 1491 Venetian edition by Pietro di Piasi Cremonese. While we had originally intended to do Inferno, upon further contemplation of the task at hand, we decided the Library team was ready to tackle a more substantial project.

I have to say, I, for one, am really enjoying what Task Force Wargames has been doing over at Castalia. Reading Alex’s post on the old Avalon Hill game, Air Assault on Crete, is the first time I have ever wanted to play that game. The unusual zone control rules sound fascinating, and frankly, superior to the norm.

This game is hard. Very hard. Part of why it is hard is because it is rules heavy even for a wargame, but it is doubly so because it is so different from most war games I’ve played. This difficulty is a bit asymmetrical, as many of the special rules apply only to the German player (such as conveys, paratrooper drift and air power) but you’ll find in the options of the advanced game plenty of fiddly bits to keep the Allied player scratching their head and checking the rulebook. You also can’t bring with you any mechanical assumptions you may have based on other similar wargames because so many of those assumptions would be wrong in the case of Air Assault on Crete.

In several games, fog of war rules may be limited or optional, but I can’t imagine the Allies having a chance in this without the facedown setup. The Germans have to land, take and hold at least one of the three air bases at Maleme, Heraklion and Retimo. In the basic game, the Allies win by preventing this (an almost impossible task). In the advanced game, the Allied player wins by putting up a decent fight and successfully evacuating a sizable portion of their forces. The fog of war effect is continuous throughout the game, in that any Allied units that are not adjacent to German forces or actively being targeted by German bombardment are kept face down. This allows the Allied player to mask his strength and shuffle non-combat units to evac points, but can sometimes be a bit of a hassle, as one will constantly be checking their piles for AA units and defensive artillery anytime anything happens.

This sort of thing isn’t for everyone, or even very many gamers, let alone normal readers, but it is illustrate of the depth to which we intend the Castalia posts to increasingly go. If Wargame Wednesdays aren’t your cup of tea, one of the other days will be. And the newly discovered HP Lovecraft letter that Jeffro posted which mentions A. Merritt’s work is intriguing for any fan of the writer.

In barely tangential news, I am having a great time reading through the Domains of War rules that I acquired as part of the Sinister Stone of Sakkara kickstarter that I backed last year. If they’d been around when I was in junior high, I probably would have played a lot more RPGs. Forget role-playing as an adventurer wandering through caves and dungeons, it’s a lot more interesting to role-play military campaigns and battles.

We’re pleased to welcome the first of FOUR new Castalia House bloggers today, as Morgan makes his debut with a post on what he describes as the Sword & Sorcery Extinction Event:

In the early 1980s, if you were new to the sword and sorcery genre, you
could go to your local chain bookstore, generally B. Dalton or Walden
Books and get the core library in short order. Robert E. Howard’s Conan,
Fritz Leiber’s Fafhrd and the Gray Mouser, Michael Moorcock’s Elric
were all there. There was a period around 1983 that you could get Karl
Edward Wagner’s Kane books, C. L. Moore’s Jirel of Joiry, and Timescape
editions of Clark Ashton Smith. Sword and sorcery in paperback form went
back to 1966 with the Lancer editions of Conan. There was a post-Conan
sword and sorcery boom in the late 1960s where you had Brak, Thongor,
Kothar with eye catching covers painted by Frank Frazetta or Jeff Jones.
That died out around 1971.

There was a second boom in the late 1970s
fueled by Zebra Books reissues of Robert E. Howard non-Conan material
and Berkley Medallion issuing of nine collections and one novel and
another six reissues of previous Zebra paperbacks with new covers. All this created a coat tails effect with new sword and sorcery novels
and anthologies published. Many of them were bad. Some of the books were
really science fiction disguised to look like sword and sorcery. The
minor publishers such as Manor, Zebra, and Tower were looking for
anything to slap a barbarian with a sword on the cover. Those publishers
were gone in the early 80s leaving Ace, D.A.W., Bantam, Del Rey, and
the new Tor Books as the main publishers.


Morgan will be blogging on Sundays; we’ll be introducing the other new bloggers in the coming weeks.