Curiouser and curiouser. Nationalism rises. The interesting thing is that the news here is all-Salvini all the time now. Conte could arrest half the bureaucracy tomorrow and I’m not sure the media would even notice.

Unrelenting Yellow Vest activists have marched in Paris and other French cities for the 24th straight weekend, just days after Emmanuel Macron tried to placate the protest movement with promises of lower taxes.

The demonstrators who assembled in Paris, Toulouse and Strasbourg on Saturday appear to signal that despite the French president’s recent concessions to the group, the Yellow Vest movement is alive and well.

On Thursday, Macron held the first major press conference of his two-year presidency, in which he announced that he wanted to implement “significant” income tax cuts. The televised conference, however, was not well received among those who have turned out week after week to demonstrate against Macron’s business-friendly austerity measures.

Notice that even France, which is the most civic-nationalist of the European nations, is more aggressively nationalist than the USA. Civic nationalism is literally demoralizing, as it is nothing more than stealth Globalism Lite.

As anticipated, nationalism is replacing failed conservatism all across the West:

Euroskeptic party, Forum for Democracy, is set to become one of the two largest groups in the Dutch Senate, stripping the ruling coalition of its majority after winning provincial elections on Wednesday. Forum voor Democratie (FvD) has scored a major victory and is set to win 12 seats in the upper house of parliament – as many as Prime Minister Mark Rutte’s conservative VVD Party, Dutch broadcaster NOS reported after the majority of the votes were counted. The outcome also means the loss of its Senate majority for the ruling coalition, which comprises four center-right parties led by the VVD.

The 75-seat Senate will be elected on May 27 by 570 members of 12 provincial councils whose composition was decided on Wednesday. The FvD scored slightly more votes than the VVD after receiving a surge of last-minute support following a shooting in Utrecht this week by a Turkish-born man. The party’s leader Thierry Baudet immediately pinned the incident on the government’s “lax immigration policies.”

“If people want more deadly shootings like the one in Utrecht, then they have to vote for the VVD,” he said a day before the elections.

Conservatives conserve nothing. Not the marriage, not the ladies room, and not the nation. They are feckless, hapless, virtue-signalers defined chiefly for their ability to lose to the Left. Nationalists are taking power in Austria, Holland, Hungary, Italy, and Switzerland, and it is only a matter of time before they do so in France and Germany as well.

Ignore the gatekeepers. Reject them with the contempt that is their due. They are doing the work of the globalist Left in trying to prevent the rise of true nationalism in the place of their fake “civic nationalist” statism.

But Santo Matteo has proven otherwise. The graph below shows the reduction in the number of refugees entering Italy from 2017 through March 11, 2019. Of course, the Italians do have centuries more experience in resisting invasion of their borders upon which to draw.

The pro-globalist government is responsible for the worst anti-public violence in France since 1871:

In summary, 20 have lost eyes, five hands have been partially or entirely torn off, one person lost their hearing as a result of a TNT-stuffed GLI F4 stun grenade.

“I have repeatedly seen injuries consistent with those suffered in serious traffic accidents, or after falls from a great height,” neurosurgeon Laurent Thines told L’Express newspaper this week.

These are real wounds of war. And they are happening in France, on the streets.

While the May 1968 student and worker protests that upturned French history claimed four lives directly, Thines believes the overall scope, length and intensity of violence was much more contained than the current chaos. If so, France is likely witnessing the worst non-wartime bloodshed since the Paris Commune massacre of 1871.

The evil Macron government is at war with the people of France. So far, the people have been astonishingly restrained in light of the violence being utilized against them. One wonders how much longer that will last.

And they are targeting one of the obvious vulnerabilities of the liberal imperialists:

Yellow Vest protesters are hoping to trigger a bank run with a nationwide coordinated cash withdrawal. By threatening the French financial system, protesters say, they want to peacefully force the government to pass their reforms.

Protesters plan to empty their bank accounts on Saturday, withdrawing as much money as possible in a bid to undermine the French banks – if not the euro itself. The plan is to “scare the state legally and without violence,” forcing the government to adopt the movement’s Citizens’ Referendum Initiative, which would allow citizens to propose and vote on new laws.

“We are going to get our bread back…you’re making money with our dough, and we’re fed up,” said protester Maxime Nicolle in a video message shared on YouTube.

A well-coordinated financial action has the potential to bring the French banking system – and by extension the euro – to its knees, as banks always hold only a fraction of the funds the country’s citizens have in their accounts. However, most banks limit ATM withdrawals to a relatively low amount, meaning protesters would have to line up inside the banks to withdraw the rest of their money, giving the state plenty of time to place restrictions on withdrawals – though this would, no doubt, spark further protest.

In an extraordinary public EU feud, Italy’s Matteo Salvini and his coalition partner have thrown their support behind France’s Yellow Vest movement, while Salvini also accused President Emmanuel Macron of being against his people.

“I support honest citizens who protest against a governing president [who is] against his people,” said the Italian deputy prime minister…. In December, Salvini mocked the French president as a “lab mouse elected to keep the elitist political system in place.”

The prime minister, Cinque Stelle’s di Maio, said, “Politics, in France as in Italy, has become deaf to the needs of citizens who have been kept out of the most important decisions affecting the people. The cry that rings out strongly from the public squares in France is: let us participate! Yellow vests, do not quit!”

Emmanual Macron observably does stand against the French people. He is an enemy of France. He is a globalist, an elite liberal imperialist of the very sort Hazony describes in The Virtue of Nationalism, and he has rejected his nation.

Don’t believe the mainstream media. The Yellow Vest protests are very, very far from over.

French police have deployed tear gas in a bid to quell Yellow Vest protesters in a tense stand-off in the city of Rouen in Normandy. Demonstrations quickly spiralled out of control in the northern French city on Saturday as protesters and riot police clashed in the streets of the picturesque town. Paris, the scene of the most dramatic demonstrations since the rallies began in November, was significantly quieter than previous weeks but it also saw dozens of Yellow Vests gathered on Champs-Elysees on Saturday. On Thursday, a group of the protesters attempted to storm the Mediterranean castle that serves as President Emmanuel Macron’s summer retreat. 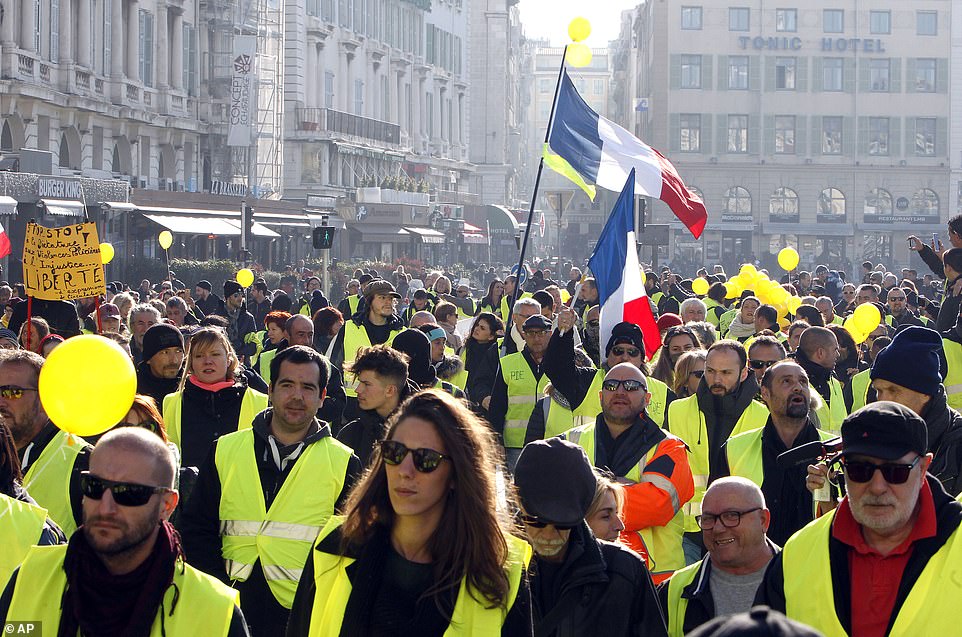 I would like to assure everyone that these recent developments have absolutely nothing to do with a certain gathering that is known to have taken place in Spain.

Spain’s socialist government could be in trouble as a populist party is storming the polls in the country. The right-wing VOX party in Spain has been gaining strength and every poll they seem to rank higher. Yesterday it was revealed that VOX have reached an all-time record high in Metroscopia’s poll.

They are now at 11.5 per cent which would mean they could form a government if there was a vote today. The last election, they garnered 0.2 per cent.

That being said, the Nationalist Right is inevitable all across the West. That’s not rhetoric, although it would serve as effective rhetoric. It is, rather, a pure dialectical analysis. The nationalist trend that began in 2015 is the inevitable reaction to the 80-year trend towards globalism. At a bare minimum, the counterreaction will last until at least 2040, but it could continue until 2145 if, as I suspect, the trend has permanently reversed. 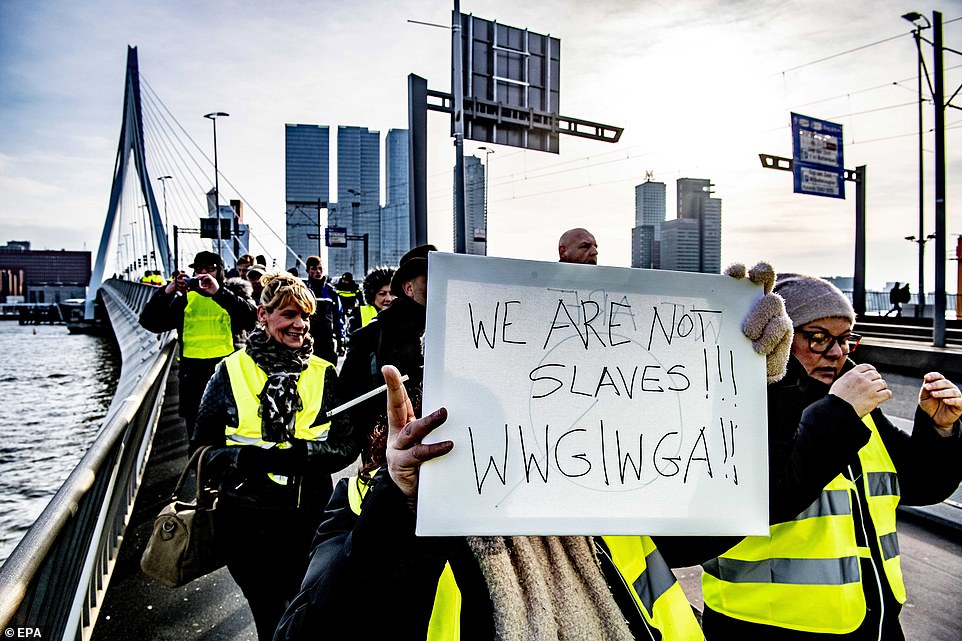 Still don’t see any benefit to Q? If you don’t, you simply don’t understand 4GW or why the globoprop is so focused on attacking what has become a universal symbol of resistance to their rule. This picture isn’t taken in France, by the way, but in the Netherlands.

If you are still having trouble grasping the concept, I suggest you read There Will Be War Vol. IV. Gordon Dickson’s story, “The Cloak and the Staff”, provides a useful lesson in the importance of symbols in the face of ruthless oppression.