The daily Vaccine Nazi sob story is today focused on reasonable people who just want to wait for more scientific data instead of the usual anti-vaxxers:

Removal firm boss Brian Lynch, 46, said he was not an anti-vaxxer, but wanted more long-term scientific data before getting the jab.

He was admitted to Royal Blackburn Hospital on July 7 and spent weeks in intensive care, during which he vowed to friends he would get the vaccine if he recovered.

In a Facebook post from his ICU bed Mr Lynch said he felt ‘the most frightened he had ever been’ and admitted he ‘thought it was the vulnerable and the elderly who got hospitalised’.

But Mr Lynch, of Blackburn, Lancashire, was later placed in a medically-induced coma and died with his family and wife Gina by his side on July 31.

Mr Lynch’s death is the latest in a series of vaccine sceptics and anti-vaxxers who have died after refusing to receive the jab this year.

The lesson: Don’t wait for the long-term scientific data! Get fully vaccinated now and you won’t… um, okay, well, wait a minute….

AMR responded to a medical emergency at Sherriff Vance’s home on Wednesday morning, according to a declaration issued by the Hinds County Sheriff’s Office. When the medical response team arrived, Vance did not respond and was pronounced dead.

Hinds County Sheriff Captain Tyree Jones confirmed the news to WLBT-TV this week. On August 4, the department Noted that Vance died of natural causes due to COVID-19, according to coroner Sharon Grisham-Stewart. His death will be labeled as a “COVID-related death.”

The sheriff was fully vaccinated and did not suffer an adverse effect, but despite his vaccinations and his age, contracted a lethal case of Covid-19. This appears to be ADE-in-action.

This is one theory, anyhow. But it does explain why everyone who seems to know what the actual facts are is so convinced that things will have to change:

I have no reason to believe that this criminal enterprise has ceased their activities. I also would not be the least bit surprised to see a concurrence between payment fraud and voter fraud in other states.

It’s becoming ever more clear that we aren’t the minority, that it’s not even a 50/50 society as the voting always seems to have it. It’s just one gigantic lie that has been successfully sold by the People of the Lie.

I wonder how the mainstream news will explain this anomaly away. Is reality on tape delay? Where are the live events actually taking place? The televised video looked like it was being filmed somewhere sunny, while Washington DC was overcast and grey. Also, you’d think the very loud ambulance siren would be heard from the “White House” feed.

The media’s relentless demoralization campaign against President Trump’s supporters has completely failed. His job approval rating has actually risen while being attacked by the Fake News and impeached by the Fake Congress that is attempting to install a Fake President:

The attack on Capitol Hill took place on January 6. Since then, there has been more than a week of 24/7, highly-coordinated media hysteria attacking the president as a traitor, as guilty of sedition, of being criminally liable for leading a violent coup against the United States of America … and his job approval rating is up a point.

Don’t pay any attention to media pollsters. Please don’t. They’re all crap. All liars. All proven liars who have been deceiving and lying to you for at least three election cycles. Rasmussen is one of the few pollsters you can trust, so when Rasmussen tells us Trump’s support has not slipped, you can not only believe it, you are offered the opportunity to wonder why.

The main reason why is that corporate media no longer have the power to sway public opinion. Look at what’s going on out there right now. You not only have the fake media accusing Trump of sedition and of starting a riot, you have all of Hollywood climbing on board and the Democrat Party impeaching him (again).

In other words, the media and Democrats and Hollywood are only talking amongst themselves. No one else is even listening. These institutions have turned it up to 11 for the past ten or so days, and have persuaded no one NO ONE to drop their support for Trump.

I expect that his job approval rating is going to rise considerably in the next week or so. Enjoy the show.

As many as 25,000 National Guard troops will be in Washington, D.C., for President-elect Joe Biden’s inauguration next week, the Army confirmed on Friday. The Defense Department authorized up to 25,000 service members — an increase of 5,000 from numbers confirmed earlier this week — to support the “federal law enforcement mission and security preparations” in the inauguration, as led by the Secret Service, according to an Army statement.

This supposed Trump video looks more than a little odd to me. It’s uncharacteristically short, and I also note that the “new administration” is not named. And whatever happened to all that professed love for the protesters? Look at his neck from between 1:30 and 1:40. Does that look even remotely real to you?

Most of all, it sounds like Nancy Pelosi’s speechwriter wrote it.

Anyhow, as always, wait 48 hours before you overreact again. And don’t forget the man is a Sun Tzu fan.

All warfare is based on deception. Therefore, when capable, feign incapacity; when active, inactivity.

UPDATE: By the way, I should mention that I thought the previous video might be fake too. I just didn’t comment on it at the time.

Many readers here won’t even remember the name “cisbio”. He’s a gamma troll who was banned back in 2011 after his No True Atheist arguments were slapped down. Nine freaking years later, he’s back trying to take shots at me for having “run away” from the USA nearly 25 years in advance.

First of all, I had little choice considering the bio-nuclear conflagration that will consume every living creature in North America once the war between the US military and the aliens from the hidden fourth planet orbiting Alpha Centauri begins in late 2021 when the defeated Harris forces successfully convince the aliens to abandon their neutrality and provide them with advanced weapons technology…. wait, I’ve said too much… Never mind all that. How about that Supreme Court decision? Pretty lame, am I right?

Second, observe how insanely vengeful gammas are, and how long they will wait in silence to strike back at you in revenge for the public humiliation they suffered at your hands. No wonder women don’t want to allow gammas to get anywhere near them at any time. They instinctively grasp that merely smiling at a gamma could lead to literal decades of needing to be on their guard against the long-delayed gamma revenge attacks.

On a side note, there are a remarkable number of shills appearing in the comments today. I’d estimate 3x to 4x normal, most with Google accounts and names you won’t recognize as regulars despite the breezy sense of familiarity they exude. There are over 300 comments caught in the spam trap already and it’s not even 9 AM yet. So, be aware that most of the blackpilling and regretful acceptances of Trump’s defeat you’ll see is Paid Fake Comments. The mods have nuked the most overt stuff, but we’re leaving the more subtle stuff so you can learn to recognize it.

Here’s an example from our friend “Peter”, whose comments I’m sure all of you will know and recognize from all of his many previous posts that you somehow can’t recall ever seeing.

Look guys.. Trump did his job and is now done. His personality flaws eventually over came his policies but you can take solice in that the political landscape has been changed forever. Out of everything that he did, the one thing most important is to present an example of what will work in the future (and what doesnt). Imagine a future candidate with the same policies but without the significant personality flaws. Dont shed a tear because what happened could not have been better.

And don’t worry about Biden.. he is a one term president by nature of his age, he is middle of the road and in some case more conservative on some issues that Trump. Four years as vp will not be enough to get Harris elected and there are several possible candidates for 2024.

It’s the “look guys” that amuses me. He’s just one of us. Just one of the guys. Hello, fellow guys!

And that pollsters literally work for Democrats, you certainly do now. Now THAT is what is called a smoking gun. Notice that Ryan literally couldn’t buy a win from this guy.

Fake Science is beginning to face the cruel realization that Nature is calling its bluff:

In recent years the National Park Service prominently featured brochures, signs and films which boldly proclaimed that all glaciers at Glacier National Park were melting away rapidly. But now officials at GNP seem to be scrambling to hide or replace their previous hysterical claims while avoiding any notice to the public that the claims were inaccurate. Teams from Lysander Spooner University visiting the Park each September have noted that GNP’s most famous glaciers such as the Grinnell Glacier and the Jackson Glacier appear to have been growing – not shrinking – since about 2010. The Jackson Glacier—easily seen from the Going-To-The-Sun Highway—may have grown as much as 25{d95326ee5ea65e892c2d26437d890471edde2c6e603231f0d9f2e7742fd3a7fa} or more over the past decade. 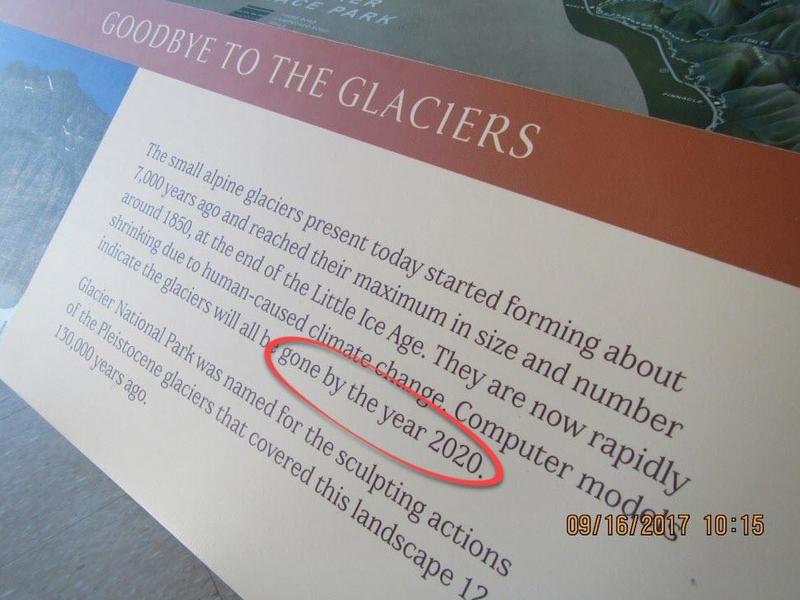 Apparently those computer models that indicated the glaciers will be gone by the year 2020 are inaccurate. That, or it is going to be one serious inferno of a summer.